Mighty spellcasters battle to control the power of the gods in Godsforge.

This November, new realms of its world are revealed in the game's first Kickstarter, featuring two new expansions: Return of the Dragon Gods & Twilight of the Great Houses.

In Godsforge, you're an elite spellcaster. Casting spells is fast and fun, as you roll your dice then combine and re-roll the results to forge the elements you need to play your best card, right now. The best features of Godsforge are quick, simultaneous play for an epic multiplayer fantasy battle experience. 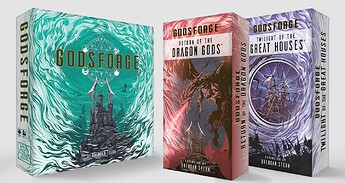 Godsforge only gets better with the new expansions:

Return of the Dragon Gods features:

Twilight of the Great Houses features: