What would you do with an old Roman altar?

I really want to have some old Roman altars in my game after reading an article in Ancient Warfare magazine, which led me to this neat article about color restoration. 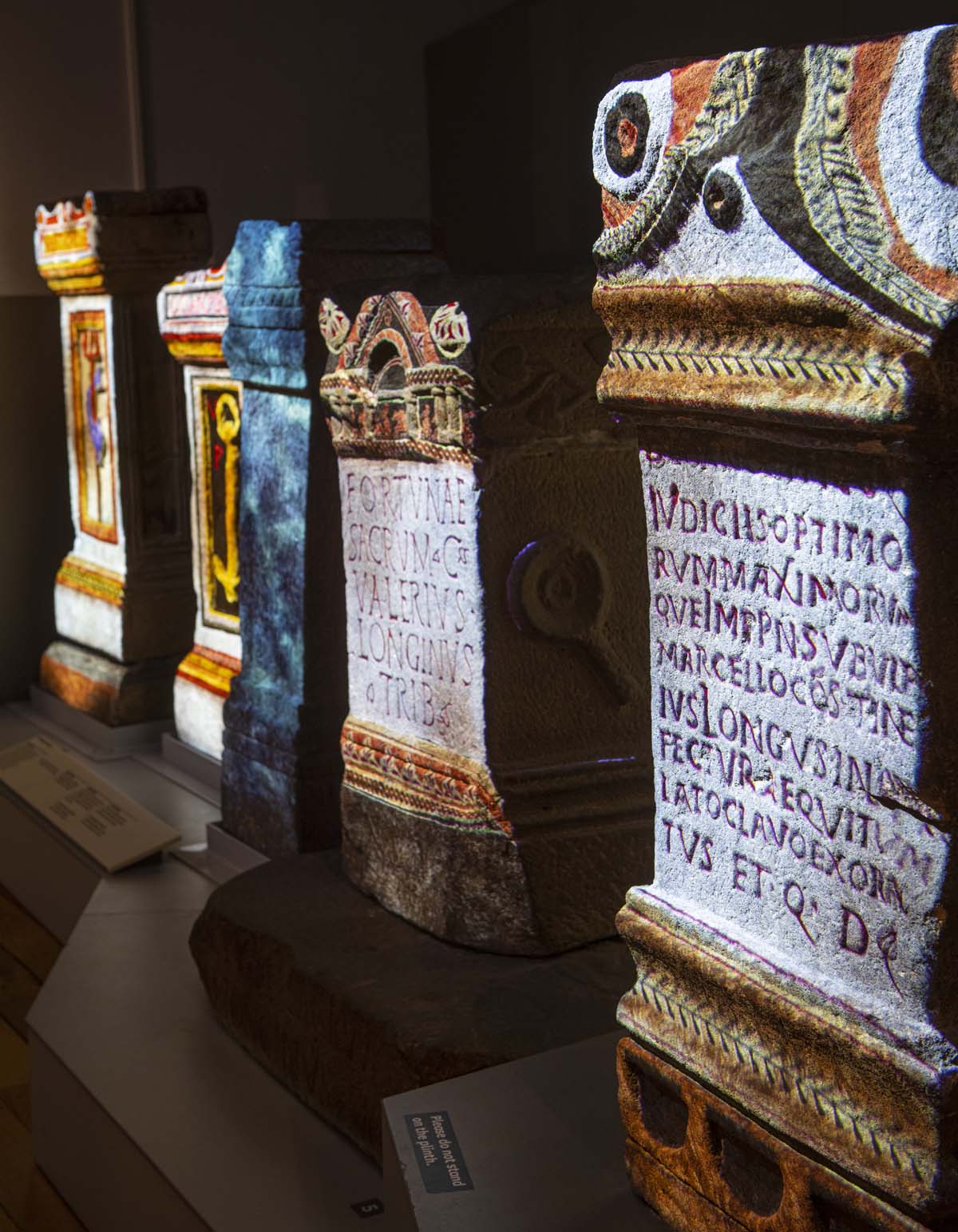 Seven Roman altars at the Great North Museum: Hancock now feature animations projected directly onto the stone surface Historians often tell us to try and visualize the past as a colourful place – whether it be the bright colours of...

You find an old altar to Hercules, or Minerva.....what happens with it?

That ancient statues from Egypt, Mesopotamia, Greece and Rome were colorless marble was a mistake that started during the Renaissance. They found ancient statues that were colorless because the original paints had been worn off by exposure to the elements and copied that. While we might find the gaudy colors "tacky" today, to them it screamed "expensive".

IOS, we actually did discover an ancient temple of Hermes. Used it as the basis for the one in our Covenant and used actual colored marble rather than paint in creating everything. Though the alter is the actual alter from the ancient temple moved to ours.

For use in a game, you would have to determine if it was actually supernatural or not. If it was, is it aligned with the Faerie or Magic Realm.

Being aligned with Faerie is more likely for most of the old alters, since many of the Greek and Roman gods were Faerie. While it might serve as the core of a Faerie Aura forming within the Covenant, this is less likely unless the Covenant has a weak Magic Aura. Though it might serve as the nexus for a Faerie Regio. A lot of the possibilities depend on if they see actual use after relocation to the Covenant or not. If not used, then they will only have any non-Hermetic effect you assign and possibly serve as a way a Faerie manages to take up residence within the Covenant. The AotH will most likely prevent it from doing anything for the first year. After that it will most likely try to take part in the annual casting. How easy this is depends on how the Covenant conducts their casting. If it is treated as a community wide event in which all residents take part, then you know it will try to slip in and take part. It will also do what it can to gain worshipers which can lead to a cult of pagans forming in a Covenant which had none before.

Ones aligned with the Magic Realm are Preternatural Monolith Tethers, which can have several centuries of use. Relocating and using one within the Aura of a Covenant will most likely cause a spike in its Base Aura rating which will cause the entire Aura to grow in strength. For Magi who wish to make their Aura stronger, doing something like this would be a goal. "Stealing" Monoliths is already covered in HP and TME. Having it have some non-Hermetic effect is possible and could make for some very interesting stories. Many of the ones for the Demigods (Hercules) are possible to be Magic rather than Faerie if there is a Cult of Heroes tied to them. This change is possible even if they were originally Faerie, depending on how they are used once in the Covenant.

So you can get non-Hermetic effects, Aura boosting, Faerie Aura or interaction, the raise of Paganism, or lots of other story ideas out of one being moved to the Covenant. Depending on if the Covenant is hidden or not, you can also get stories with the Church out of it. Because you know if a Priest or very faithful Catholic discovers that there is a Pagan Alter in use within the Covenant it will cause some interesting effects.

as a player I would instinctively want to cast "Stone tell of the Mind that sits", so be prepared to give your players the full history of the stone as filtered through the perception of the altar.

I would see such an altar as vis sources, carrying out the appropriate ritual on the right day(s) of the year will yield Vis. Minerva: Me, Hercules: Co etc

I agree with Troy, choosing whether to make the altar faerie or magical is important, especially as the Covenant could end up with a faerie version of the divinity in question (in one of our sagas, we had first an altar to Odin, and once he manifested, we build him a feasting hall which we filled with faerie ghosts we rescued from Tuonela).

After that it will most likely try to take part in the annual casting. How easy this is depends on how the Covenant conducts their casting. If it is treated as a community wide event in which all residents take part, then you know it will try to slip in and take part.

Not to sidetrack the thread too much, but while active participation in the aegis ritual is enough for a magi to ignore the effects of the aegis, that doesn't work for beings with might. They need to be invited and issued tokens, and the invitation can only be extended by a magi. I know some games have simplified that requirements, but that isn't RAW.

Magical, Infernal, Faerie, and Divine creatures and persons may be brought within the Aegis...

By RAW that is required to bring them within the Aegis if it is already up. It goes on to cover what happens if that invitation is revoked at a later time.

The Aegis is highly complex, has lots of holes in its design, and has been declared both to large and to complex to receive errata. So areas like this are completely YSMV.

EDIT: I should probably just delete this post, since if we get into it then it will completely side track this thread...

Does anyone keep reading the title of this post and slightly alter it to fit to “What do you do with a drunken sailor”?

I suggest we take up this discussion by private messages.

Thank you for identifying it! I knew it was a familiar melody but for some reason my brain kept conflating it with "Can't go back to Constantinople". I have no idea why.

I think both of those music references are great, and found the threadjack to be interesting!