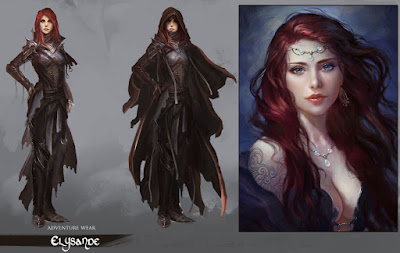 Aureliana was a foundling, a half-faerie child discovered in the thistles by an aging washerwoman, Greta, in a prosperous German covenant. Never having had a child of her own, the woman took in the babe and raised her. The child, named after the golden sheen in her skin and eyes, grew precociously, showing herself as clever and eloquent, able to speak in full sentences early. She had a penchant for getting herself in trouble, but not out of any desire to harm - she simply wanted to do, and wasn’t always able to see why she shouldn’t.

At the age of 8, Aureliana’s Gift manifested itself in her first Turbulence; as she hid from some of her friends in a game of Hide-and-Seek, flickers of magical light spun out from her skin, skittering around like living things. The Archmagus Tefernis of House Ex Miscellanea, a renowned Pralician who had brought many hedge magicians into the fold of the Order, recognized the sign of a nascent maga and took her from Greta’s care. During her apprenticeship, Aureliana learned that she had a powerful innate talent for magic in general, but that Hermetic theory seemed, at times, a poor fit for her expression of it. She learned to cast...differently than her sodales, but struggled to master the nuances of Hermetic spells. Despite this, her fae nature lended itself to the use of the Pralician technique of discovering and analyzing magic, and Tefernis ensured that she had a rounded education in the Arts so that she could at least recognize any effect or sorcery she would encounter.

Released from service with the Archmagus’s blessing, Aureliana (she never changed her name, finding it fitting both mystically and personally) now crosses the ocean toward the Isles, excitement beating in her heart. What new magic lay waiting for her? More than anything, she wanted to be the one to find something that would change the way the Order saw magic, the way it saw sorcery as a whole.

She would be immortal, even were she to die doing it.