I'm just getting ready to run a game for the first time and noticed there was a combat app. I think was is the key word. Does it still exist?

Sylvean Master - think it is IOS only

Sylvan Master is/was iOS only. Apple has currently de-listed the app because they've broken backwards compatibility and want all apps updated. (Our testing still indicates that it still works on modern iPhones for those who have it.) We're looking at the viability of updating the app, but unfortunately we don't have a current timeline on when or if we can make that happen.

Is there ANY chance that there will ever be an Android version of Sylvan Master? There are almost as many Android users in the US as there are iOS, and worldwide, significantly more.

I'm an Android user myself. Getting an Android version would be great and is certainly a priority, but we don't have a specific timeline for achieving that.

The iOS version of the app, however, has just be re-listed by Apple!

More. Change a bit of the topic - would there be something similar of the combat app for VTT, I am more thinking of foundry rather than Roll20 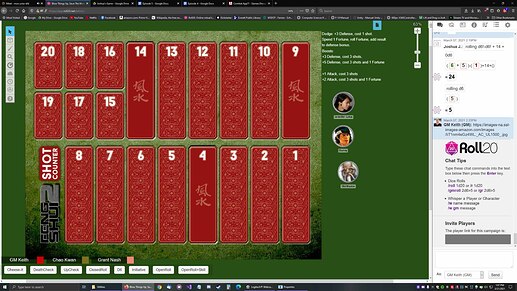 Roll20Screenshot2560×1440 273 KB
While I use Roll20 instead of Foundry, I would think that it would be a similar process for Foundry. I uploaded an image of the the Shot Tracker from the PDF, and placed it on the background layer of a page. I then took images from online or from the FS2 PDF, and made tokens out of them (using TokenTool, I think--it was a while ago) that everyone can move.

The hardest part was figuring out the macros for rolling dice. Roll20 has FS2 character sheets, but the last time that I looked that them (which was several years ago), they just told you the results of the roll and didn't show you the actual dice rolls--an important thing if you're looking for boxcars.

My point is that it was fairly easy thing to do for Roll20, and I think that it would be easy for Foundry. Maybe there are some Foundry YouTube tutorials that could show you how to do it?

The FS2 character sheet on Roll20 now reports the individual dice rolls in chat. I've been using Roll20 to playtest Burning Dragon and Apeworld on Fire!

The Shot Counter image is available as a resource here: https://www.atlas-games.com/fengshui

That's also what I did for my Roll20 set-up.

Getting an official, high-quality integration for our RPGs on the various VTTs is important to us, but, to be perfectly honest, also difficult for a company of our size to easily pull off. I'm often forced to choose between focusing on that or focusing on getting the next book published, and the new books simply have to take priority.