Covenant Description (to be renamed)

Describes the covenant where the magi live.

About 30 km northeast of Bamberg, on the south shore of the Main river, is the small town of Staffelstein. In the heights above the town is the Banz Abbey, just north of the river. In Staffelstein, as in several place along the upper Main, hot springs bubble up to the surface.

Just north of the town is a hill named Staffelberg, which was the site of an Oppidum (a fortified town) during the time of the Celts. There are a few shallow caves on the sides of Staffelberg, one of which is the entrance to a magical regio under the hill.

The regio was discovered almost 2 centuries ago and used to establish a small Hermetic covenant. The magi who lived there expanded the caves under the hill to install their labs and living quarters, but were forced to abandon it after when the local vis sources began to dry out, but also because the entrance to the regio appeared to become unstable.

A few years ago, Tandaline of Bonisagus found out about the site and investigated it. She found that at least one of the former vis sources had regenerated, though it was a bit inconvenient to harvest as it is a bit irregular. Still, she thought the location could be suitable to establish a new covenant, and passed along the information.

"A few years ago, while I was perusing the notes of old Tribunal proceedings, I was intrigued by the mention of a covenant named Menosgada. I'd never heard the name before, which isn't that surprising when you consider the fact that those proceedings were from before the Schism. Still, I was intrigued enough to try to learn more about this covenant." She shrugs, looking at you with green eyes, "the site of previous covenants have been know to have vis sources that were thought to be dried out, but which can still yield a pawn or two."

"Anyway, looking for this covenant in other documents of the same period took some time, but I eventually found a redcap journal who mentioned it." She nods to Morrigan, "That is the archives you mentioned earlier. Or at least, a partial copy that I made and sent to your mater."

"This covenant, you see, was located somewhere in eastern Franconia. After a while more searching for a more precise location in various scrolls, I was finally able to pinpoint its location, as well as gather other informations about it, such as the fact that it is in a regio and how to access it. Armed with that, I decided to travel there and see for myself."

Tandaline's blue eyes twinkle as she continues her tales, "So, after a few days of travelling, I arrived at this village along the Main river. About a mile away is a fairly steep hill, surrounded by the remains of some sort of very old fortifications. There was probably some sort of settlement on the hill at the time of the celts, but there isn't much trace of it now. The hill itself has a weak magical aura, so I knew I was in the right place."

"Even knowing what I was looking for, locating the correct entrance was not easy, as there are many cracks and shallow caves scattered around the hill. I can tell you from walking around the top of the hill that it over a mile of boundary. But eventually I found one that led a bit deeper, near a spring that flows out from the hill. The procedure to enter the regio was fairly simple, so I soon found myself under the hill."

"A tunnel leads to what appears to be a fairly large natural cavern, between forty and fifty paces wide, with a small pond of steaming water in the middle. It is hot in the cavern, with a slight silvery blue glow coming from the water. Which, in this case means both up and down, as where a stream would usually flow out from a pond, it flow up , to the roof of the cavern, where a smaller pond lies. At the bottom of the larger pond, which is perhaps four paces deep, there appears to be a great number of bones, some which appear human, some which are clearly not. They fused together and to the rock in a tangled mass. Strong magic emanates from the pond and permeates the cavern with an above-average magical aura."

"During that first visit and subsequent ones, I was able to determine that the bones are a source of raw vis, though epheremal if not harvested. A few times every season, one of the bones dislodges itself and float up to the surface, then up to the upper pond. If not collected within a week, however, it dissolves there and the vis is lost. Up to three pawns can be collected that way every season."

"Although the cavern itself appears to have been left untouched, probably to avoid disturbing the vis source or the aura, the tunnel that leads to it has two side entrances just before the cavern. On one side there is a man-made corridor that curves down deeper underground. On the other side is a circular staircase that also leads down. The corridor forms a circle around the central cavern, leading back to the staircase but deeper underground, which cleverly allowed the former inhabitants to complete a boundary for their Aegis . Four circular rooms were excavated inside of the curve, so that they are inside of the boundary but not under the pond. These were the living quarters of the magi of Menosgada."

Tandaline looks at you with purple eyes, "To accomodate the need for addiitonal space, I arranged for another circomvolution of the corridor, with three more rooms. The last of the three is somewhat larger, to accomodate the library and a council room."

Map of the area around Staffelstein: 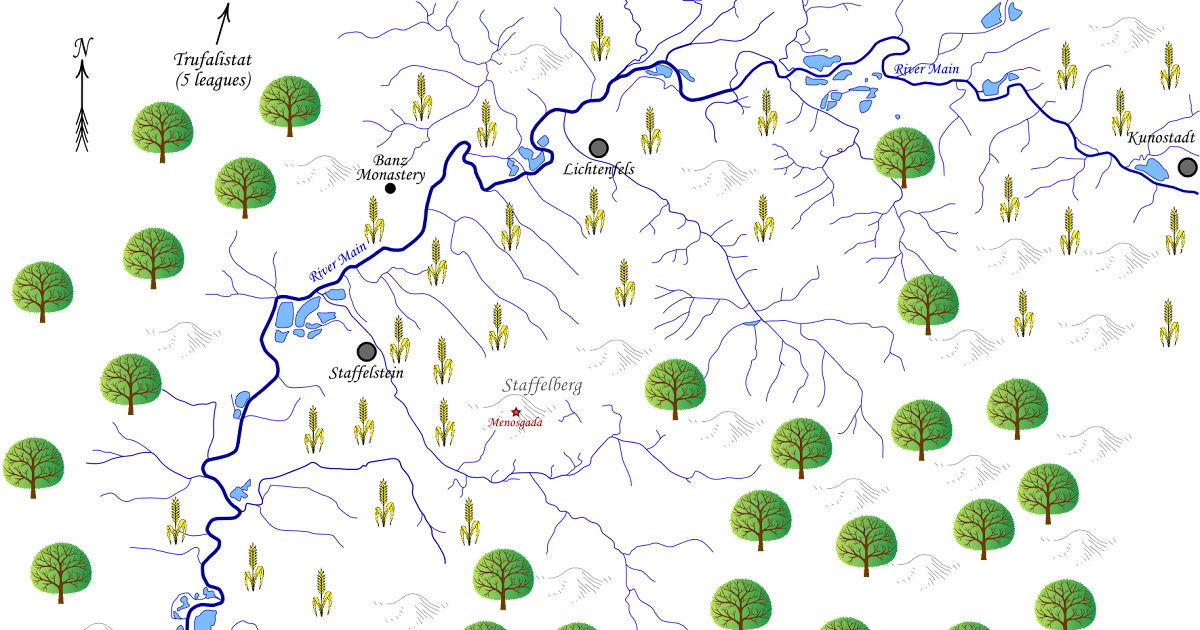 Map of the underground regio: 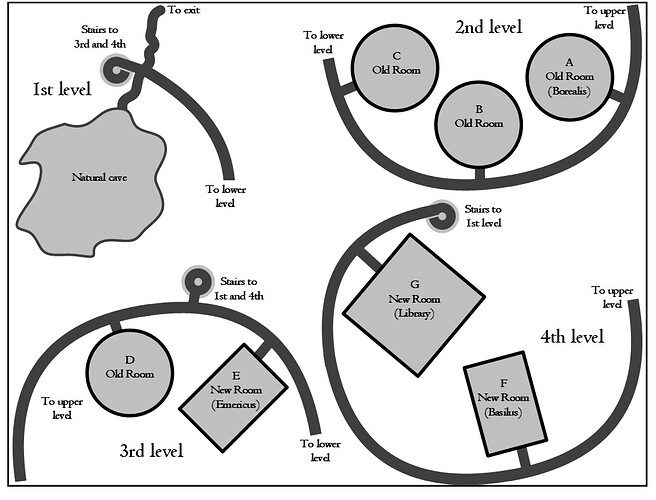