right now this is just numbers being crunched, but (rounded as paces are less precise than yards or meters, and may stand in for either):
overall area inside the walls: 282,743 sq paces
aura area: 5347 sq paces
Main building (1/3 in aura): 4920 sq paces
aura unclaimed for building: 3707 sq paces
non-aura portion of covenant/city (defined by walls) for building: 274116 sq paces
distance from walls to edge of chartered area: 430 paces
chartered area outside walls: 497,000 sq paces

I think a sketch might be helpful.
Even a very quick one would help me to visualize it.
In case I get some input regarding the form of each area (rectangular, round ecliptic, etc.) I could set up a draft.
But I have to mention: Neither do I have any software nor any experience in such sort of sketches. In other words it might look really …ähm.... dodgy, basic, and primitive)

anyone who wants to do a sketch, feel free, if more than one is submitted I'll pick the most representative.

I toyed with a map a some time ago. I'll try to upload it today.

Okay, so based on my reading of the various threads where things are discussed, here's my best guess as to (very roughly) how the covenant looks/will look: 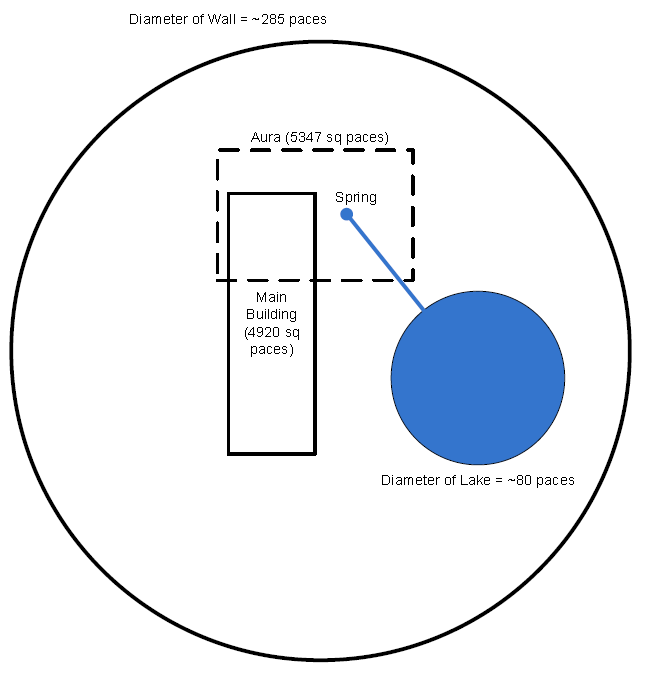 As I read, there is a small Aura in which 1/3 of a large building is placed. A circular wall surrounds the building and the Aura. Somewhere in this area is a lake, which is fed by a spring that originates in the Aura. I further understand that there is a hill in the Aura, and beneath that hill is four ruined temples.

If I have this right (and I fully realize that I may not), then the spring and stream uses up a good bit of the Aura. Is that wise, given how much the Aura is prime real estate for magi?

In any case, as I said, this is just a very rough sketch based on my reading of the threads. It may not be correct, but it can serve as a starting point for correction. Let me know what I got wrong and how I should correct it and I'll adjust the image.

My understanding is that the spring will originate in the lake itself. If it originated in the aura it would probably flood the temples.

I tried to make it to scale, but the wall should be further away. I post it so you can add the temple ruins to your map if you wish Trogdor.

Okay, here are two possibilities of how I see it set up. I'm not sure where the lake is. There are only two places that make sense, and I did a map both ways. Also, because of the aura, the main building has to be off-center. Presumably the town will eventually go in the currently open areas. Right now we seem to be choosing placement based on drawings that are not to scale. The pond is a bit over 4800 square paces, which is smaller than the aura, as is the main building, though 2/3 of the main building is outside the aura as presumably the pond would be as well (if for no other reason to avoid flooding the ruins) The ruins are excavated (open on top, not a cave) so building the main building over the ruins would be more complicated than building it to the land beside the ruins.

When you say ""not to scale," what do you think is too large or too small? By my guess, I'd say the temple is out of proportion.

I tried to make my drawings as close to scale as I could. I went with the numbers:

I goofed a bit with my original map in that I used the non-aura portion inside the walls instead of the total portion inside of the walls and got a wall diameter of 285 paces. But setting that aside, the aura, main building, and spring should all be proportioned correctly with respect to each other. Granted I had a rectangular aura. But eyeballing it, the area is approximately the same as the oval aura.

The main building and the aura are a little large (105% what they should be). But otherwise, they should be approximately the right size with respect to the walls of the town.

As a side note, if the temples are partly on the surface, and the aura is really that close in on the temples (though that may be what's out of proportion), then there's little space for us to actually build on within the aura.

from those numbers, the area of the building inside the aura should be 1640 sq paces
as to the temples, they are in what is essentially an open pit, neither on the surface nor a cave- if someone wishes to cover them and build over them it is certainly possible, but compared to locating the structure within the flat portion next to the temples it is more complex. Also the 4th temple (in the upper left) is barely a ruins, and is in fact at ground level.

The non-temple portion of the aura is roughly 35x25 paces, or 875 sq paces, which is part of why I had reservations about this building design initially. In any case however the diameter of the city wall should be 600 paces, the radius would be 300.
The aura is circular, roughly 83 paces in diameter, the same as the width of the ruins, including temple 4, the center of which is at the center of the area of the temples themselves.

That makes it a lot more clear to me.

I'm going to wait until things settle down in the covenant building thread before I try for another attempt at a map.

BTW, as I understand from poring over the past threads, the Aura around the temples is 10. Is that right?

Also, is there any Aura surrounding that, or does it cut off and go to zero?