I think the question is in the title, but what's the covenants of the two Tytalus' leader ? Buliste and Harpax are they in the domus magna or they have each a covenant ?

And do we have information about them, like their age, their faction (leprosis,...) or anything else, more than just "they are in conflict because the first ends his twilight and the second refuse to give up" ?

Two armed camps, diametrically opposed, in the same Domus Magna. Only a Tytalus covenant could maintain this level of unresolved conflict for years.

That's Fudarus, well described in The Lion and the Lily supplement so you should get that. One of my favorite screwed-up setups in Ars Magica :).
I summarized the situation for my Chronology project as per below (see the Chronology thread for the whole thing):

1195 Normandy: Prima Buliste of House Tytalus enters a protracted Twilight and is declared dead by Harpax, her hermetic brother, who wins the privilege of serving as the tenth Primus.
Harpax had been previously defeated by her for the leadership of the House.

1198 Normandy: Buliste recovers from her three year Twilight (as some suspected she would) and tries to resume her former position as Prima of House Tytalus. Characteristically, Harpax refuses to relinquish control to his rival sibling and a protracted battle ensues.
No victor has yet emerged decades later. All other full magi have left the covenant of Fudarus (domus magna of the House), which is now completely divided between them.
House members supporting the tenth Primus Harpax are “Decimi” and as staff wear revolutionary green, and loyalists of the ninth Prima Buliste are “Fideli” and as staff wear royal purple. Refusing to choose a side invites scorn.

In my current saga, one of the players chose Major Flaw tormenting master, and I assigned him Prima Buliste. It's been quite a bit of pain from afar. She's torpedoed his ambitions at Rhine Tribunal as she was guest judge for the spells competition there, she accused him of faking his gauntlet and working with Harpax, demanding vis payments for old services and threatening all sort of things (can't write too much detail here though, he doesn't even know the extent). Her new filia even enamored one of the other players to get closer.

This is the stock we use for Buliste 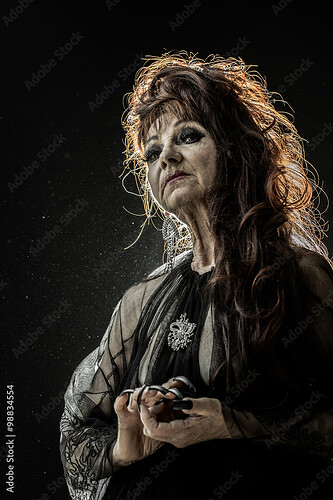 Buliste and Harpax are they in the domus magna or they have each a covenant ?

To add to other people's replies, with Fudaris being the seat of the Primus, leaving Fudaris for a another covenant would be tantamount to abandoning the claim to being Primus.

Which begs the question of what happens if the leadership split still exists at the next Grand Tribunal. Is the one who leaves Fudaris (abandons the seat of the Primus) last got the greater claim to Primus, or the one that arrives at Durenmar and gets acknowledged first by the other Primii?

Fudaris being the seat of the Primus, leaving Fudaris for a another covenant would be tantamount to abandoning the claim to being Primus.

That would be a concept nearly never used in the middle ages. Most leaders - emperors, kings, nobles, bishops - had to travel to assert their authority and fulfill their duties. Even most popes did not just sit in the Lateran palace.

Once again, I fail to think sufficiently medieval.
Would the Agents that Tytalans employ mitigate this?

You raise an army, scour their lands, take their cities and castle, go after their supporters and either subvert them or put them to the sword, you take their homebase and hold their family hostage.

Edit: you petition the chirch to support you and get your rival excommunicated.

The middle ages were no board games. 'Home base' for a noble might - or might not - be a significant source of their income. The seat of a bishopric was typically the place, where lot of the bishop's duties lay.

For an extreme example to the contrary, have a look at the Electorate of Cologne, where most Archbishop Electors of Cologne held no relevant worldly authority over the city at all and resided elsewhere: in Bonn or at the Godesburg.

There were even medieval Popes who never entered Rome, because the city was hostile and dangerous to them.

So, just taking an opponents 'home base' was by itself not a decisive move in a power contest - and Tytali would know that.

I need to recheck which one, but due to his dispute with the Emperor, the (arch) bishop of one of the franconian dioceses, lost the titular city as it was granted free city status.

Edit: there we go, found my notes:

Siegfried von Stein (ca 1190-1246), the third son and a talented churchman will become the provost of the Augustinian Monastery in Kreuznach and in 1227 become bishop of Regensburg. The family are vassals of the Archbishop of Mainz, and the position of cantor of the choir of the cathedral chapter is traditionally held by a member of the von Stein family. By 1230 he is named imperial chancellor by the Emperor Frederick II, before being excommunicated by the Pope for his financial dealings. Seeking forgiveness he will turn against his patron, thus losing the Imperial chancery.

Not in my notes, but this is how the city of Regensburg became an imperial free city.