Do you use maps in play?

So recently I've been enjoying playing around with Dungeondraft and made a few maps using it for an ongoing travel adventure IMS.

It's a travelogue type adventure (a senior magus from Stonehenge travelling around Hibernia to see what the fuss is after it was a topic of heated discussion at the Stonehenge tribunal meeting) so most of the maps are just nice ways to show the differences in the Hibernian covenants and a good way for me to cement the details about them in my own head, to keep everything consistent.

But I did use one for an encounter on the road, and because we had a tactical map and the encounter involved a lot of movement we actually used the tactical movement rules from Lords of Men. A few of the other players were surprised to learn Ars Magica even had official rules for that!

That got me wondering about different ways of playing the game. So I've put together two multiple choice polls here. The first asks if and to what degree you use maps in play, and the second is about to what degree people use extra combat rules, particularly the ones in Lords of Men.

Do you use maps when playing?

Do you use the tactical combat rules (from Lords of Men)?

P.s. If anyone's interested here are a few of the maps I've made with the tool, I highly recommend Dungeondraft (and its cartographic sister program Wonderdraft) for this stuff: 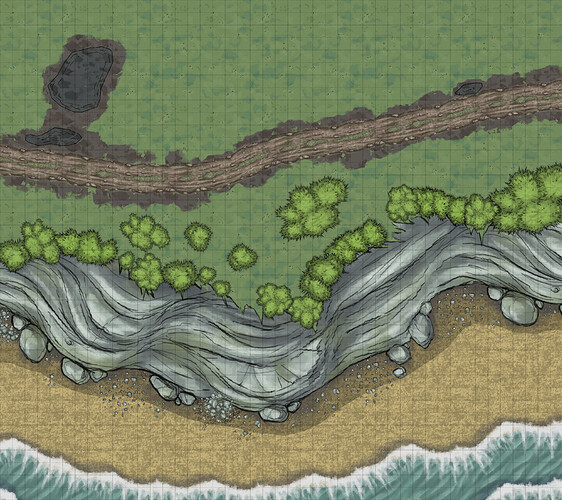 cliffside road3150×2800 2.52 MB
A muddy cliffside road near Bannow where an infernal beast threatened to chase the travellers off a cliff 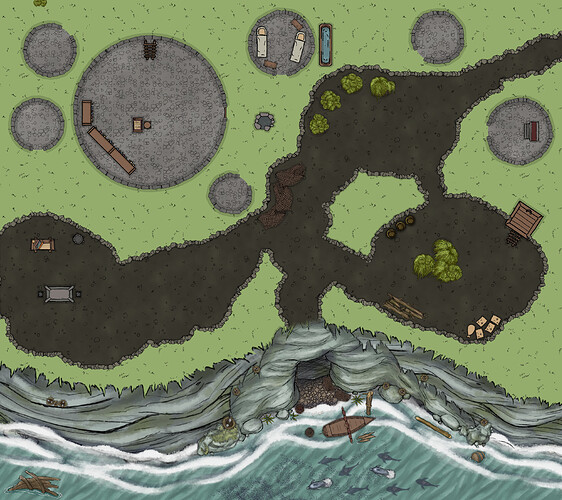 My games have often used all scales of maps, including maps of the covenant, but never tactical maps for combat. My players like to get an idea of their home covenant from a map, it helps put everyone on the same page, which might not happen with a verbal description. But I've not really seen Ars as benefiting much from tactical maps, especially since ranges and areas of effect are far less precise, and since combat is more narrative and (hopefully) less static than D&D.

While I have used tactical maps in other games, I have found they have a tendency to reduce dynamic movement and encourage gamey/tactical thinking over narrative RP thinking. Which might be fine for some games, like D&D by I don't tend to play Ars like that.

This is the first time we've ever used a proper tactical map and the tactical movement rules ourselves in Ars, and we probably won't again any time soon. It was very useful for the specific scenario as it involved keeping track of a lot of fleeing people and horses moving in different directions and different speeds (with risk of people being trampled, or of becoming disoriented and falling over a cliff edge) all while being pursued.

It's worth noting that there was only one Magus involved, and he could only use an enchanted item to produce a pilum of fire for in-game reasons. I don't know how well tactical combat would hold up with full powered magi in the mix and I've never tried it.

Usually any combat in our Ars sessions is very abstracted, pretty much just the rolls and a running description based on them. Combat very much isn't the focus and the default rules do the job. Which is funny because the only other rpg I'm playing at the minute is WFRP 4e, which is essentially the complete opposite.

While my group does make fairly extensive use of maps, we would not touch a tactical map in any way shape or form.

The two primary "in game" maps we use are a hand drawn map of Europe and the Mediterranean. We have one of each on poster board, that represent two magical items we have. The map of Europe is our variant of the Mappa Mundi enchantment, which we can make notations and additions to. The one of the Mediterranean is our trade fleet tracker. The SG uses varies board game pieces on the two to show the location of the tracked groups.

Beyond those two, our maps are for things like our covenant layout. They are not designed to exact scale, but are more used for helping visualize the layout. My group tried to get me to do it (my military MOS deals extensively with layered maps and I am certified in Erdas Imagine), but I want nothing to do with detailed maps in a leisure activity.

I wonder if the SG should simply have a secret tactical map. It might be easier to describe, to each player, what the character sees from their particular point of view, if the SG has an accurate and persistent overview of the entire situation.

I agree with all the existing arguments against the shared tactical map. Using a map to get a shared understanding of the situation means that everyone sees the situation from above, and not from an in-character view.

Sometimes I wish I had better tools for making the tactical maps. I often get too sloppy, that is sloppier than what improves the narrative. But if I take care to make good maps ahead of game, they are never the ones I actually need.

I make heavy use of screenshots from google map, with custom markers, to show where each location is while playing.

I just wish I could put a custom background instead of the very modern looking one, but it is very low on my todo list. Also a detailed map with medieval roads would be really good.

When preparing for a game, I also use Crusader Kings 2 campaign map to get a broad idea of where each duchy, county and such is located. It is also very helpful to get names for the various mundane npcs from count to bishops, kings of the locations used during game.

I never used tactical maps for combat, but it may happen.

I make heavy use of screenshots from google map, with custom markers, to show where each location is while playing.

I wonder if the SG should simply have a secret tactical map. It might be easier to describe, to each player, what the character sees from their particular point of view, if the SG has an accurate and persistent overview of the entire situation.

That's an interesting thought, I've done something like this in other games with a strong exploratory component before but never considered applying it as a general principle.

I certainly find that mapping out a location makes me consider things I wouldn't have otherwise and really helps with keeping descriptions consistent. Mapping Ashenrise covenant (described in 5e as a small Norman castle) made me do some research on early 13th century castle fireplaces, which led me to the realisation that fireplaces and chimneys are actually a very recent innovation in 1220 and not common in domestic buildings. Turns out I've been describing most buildings anachronistically the whole time...

One thing I will say in favour of tactical maps is that they can deliver information in a way that everyone is on the same page much more concisely than is possible with description. You can 100% get to the same place with verbal description it just takes longer. It's a specific case of "a picture is worth a thousand words".

I make a light use of tactical combat maps, it really depends on the situation, since Ars Magica can abstract the need very well. But I make a high use of high level map, heavily drawing from Google Maps, Wikipedia and ancient mapping projects to come up with ideas for the setting.

One thing I will say in favour of tactical maps is that they can deliver information in a way that everyone is on the same page much more concisely than is possible with description.

I totally agree. Except that it is in disfavour of tactical maps.

In a real combat situations, with a handful of combattants either side, they are not going to be on the same page. They have to deal with what is straight in front of them, and will not know what their comrades are doing.