Does a Hermetic Magus Summoning an Infernal Jinn break the code?

Hypothetical here. If a Hermetic Magus summons an Infernal Jinn, is he dealing with a Demon, and thus must be marched?

To clarify: If a Hermetic Magus summons an Infernal Jinn for study, is he breaking the code?

Also, further on: "...but one a jinni aligns with the Infernal, it has irrevocably transformed into a true demon."

If it's a Jinn and has Infernal might, it's a demon. If it's a demon that conforms to Arab folklore (etc), it's an Infernal Jinn.

I don't know that simply summoning a demon breaks the code, though it would certainly invite investigation. Summoning and binding a demon to a physical object and burying it in a strong divine aura after interrogating the demon (not sure how you are going to verify the information) might be allowable, for example.

I will not deal with devils, lest I imperil my soul and the souls of my sodales as well.

As has been mentioned, if said Jinn has Infernal Might, then it's a demon. What happens next depends on whether the magus in question is caught and if said Jinn caused any problems.

Good thoughts everyone, and thank you for the fast replies!

while summoning an infernal jinn itself might not constitute "dealing with demons" I have a hard time seeing how you could summon an infernal jinn (i.e. a demon) and have it teach you and not have violated the code of hermes. In other words I would say that having a demon teach you is as clear an example of "dealing with demons" as it can be. Of course merely violating the code is not enough to get punished, you still have to be caught. 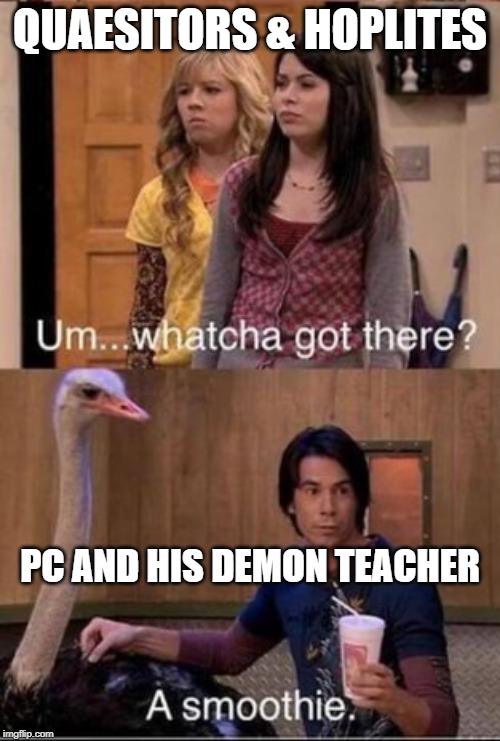 one better example- if you summon a demon who has been causing problems for someone, bind them to an object and bury it in consecrated earth to prevent it from causing more problems, or at least slowing it down, you are only "dealing with" a demon for values of dealing usually reserved for the mafia.

Pretty sure that this was one of the reasons why Venatores (RoP:I) were not open about their membership. Technically the Code could read their demon hunting 'habit' as a violation.

But like most violations, the Tribunal can just turn it into a political problem rather than 'hide the evidence' issue. Depends on the group. As long as the demon summoning is not a clear and present threat, the Quaesitor doesn't have to respond with "Kill them with fire, burn everything or the fools will doom us all".

That said, the Christian faith at the time would basically condemn you for the summoning. So a faithful Quaesitor, an inquisitive member of the Church or even just some mundanes outside the covenant who have a clue you have something to do with a demon can push this into "Bring harm upon my Sodales" territory. Witch Hunts targeting members of the Order keep Guernicii up at night.

Basically, dealing with demons is like any other part of the Code; if you need to ask if you've broken it, you shouldn't let people know what you did.

Indeed. In fact, the Order doesn't really want to unnecessarily antagonize the forces of Hell either. Certainly Hell means to corrupt all of humanity, the Order included, but that's not the same as open warfare. Demon hunting can provoke open conflict and there are definitely demons that are powerful enough to ignore some very strong Aegis of the Hearth, and not every covenant has magic items with +LOTS Penetration demon slaying devices.

This doesn't mean that magi can't (or won't) destroy any demons they might run afoul of in the course of their normal business, but when your business is open conflict with demons, then there's a problem.

Also, further on: "...but one a jinni aligns with the Infernal, it has irrevocably transformed into a true demon."

If it's a Jinn and has Infernal might, it's a demon. If it's a demon that conforms to Arab folklore (etc), it's an Infernal Jinn.

That's correct - when writing the Jinn chapter I was limited by the existing Ars mechanics in terms of interpreting the Jinn folklore which is at times contradictory. My preference would have been for Jinn to evolve through Realms or be mainly Faerie with different shades and not have the distinction but there was already enough if canon. Making a group of creatures with common abilities and weaknesses work across 3 of the 4 Realms was a challenge - hopefully it worked out OK!

personally I think the djinn should have been magic, given that the root of Djinn and Genius is the same, both referring to spirits of ideals, but the ship of how I think reals should have been presented sailed a very long time ago...

Knowing a spell that either compels or summons a demon can be grounds for a march, according to RoP:I (page 33). If the spell in question you used to summon the jinni specifically summons demons, you might be in trouble.

yeah, if you are planning to summon them regularly enough to have developed a spell, that is a bit different than simply having summoned one that one time to keep it away from where it was causing problems.
though there might be mitigating circumstances to simply knowing the spell...
"honestly, the ancient idol I found led my research in this direction and I had to invent the spell in order to make my breakthrough into unified realm theory"

...and as long as the demon didn't cause any problems, the research excuse will actually fly, especially among Bonisagus magi.