I was reading about Graham Hancock today, a pseudo archaeologist with lots of wild ideas. Underworld, makes a great reading for any Atlantis themed adventures involving underwater exploration. Whether or not you believe them is up to you, however, his writings make for great RPG fodder.

One of them is that we still do not quite know how the Romans built the Heliopois of Jupiter.

The town of Baalbek, under the Romans, Heliopolis, makes for very interesting ideas and a great campaign idea for any Levant oriented adventure ideas.

As I recall the ruins for this building have been found by archeologists. What Hancock may have added I do not know, but the building at least is real,

IMS I used Heliopolis as the location of a minor mercer house in the Levant (sort of a caravan stop for the redcaps with a portal to Harco) and made some implications that the neo-mercurians were interested in it. Sadly the saga is located in Stonehenge, so we don't get to visit the Levant very often.

I think it's a very neat site because it's enough of an unknown to give a lot of freedom in writing it, but what is known about it gives some great seeds to tie it in to lots of different bits of the setting:

Very cool place with a huge potential for use in Ars.

*Proposals of how the 800 ton blocks could have been moved into place using a team of under 200 people have been published, taking advantage of the fact that the quarry the blocks came from is higher altitude than their final position meaning no lifting is every needed - only horizontal (and downhill) movement and positioning. I'm pretty sure these ideas were published before Mr. Hancock wrote his first book but I don't actually know what he says on the topic. But the "it was built by the Nephelim/aliens/magic" explanations are a lot more fun!

The Romans were great engineers for their time, even having invented a steam engine which was suppressed by the emperor for fear it would lead to a slave revolt as it freed up labor. I think Mr. Hancock is severely underestimating their capabilities.
That said, by 1200 the complex was already in ruins to the point that it would require either modern archeologists or a regio to uncover what it was. It would likely still have a magic aura however given the amount of time it was used for ceremonies.

You might be surprised. For sure, the temples of Jupiter was probably long gone (half of it went to build the Hagia Sophia, and that's before time and earthquakes made their mark). The temples to Venus and Mercury were maybe a little more recognisable as "some kind of Roman building". But the temple to Bacchus was amazingly well preserved. Here's a woodcut from 1757 (before any excavations were ever done): 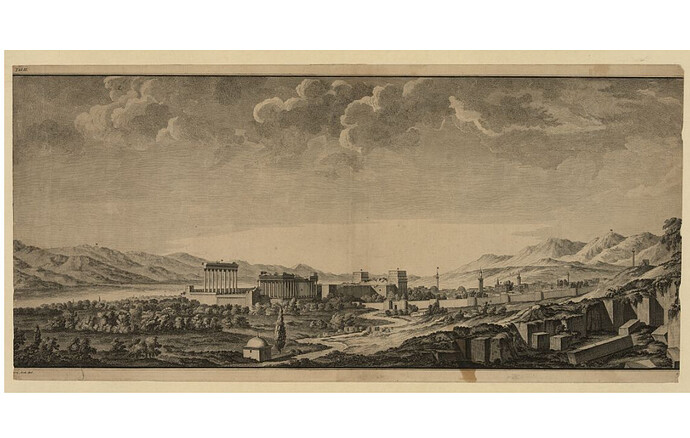 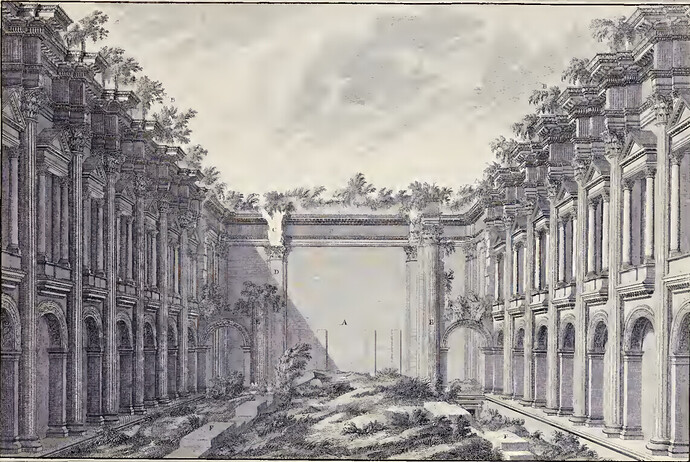 Definitely ruined, but pretty recognisable as a temple of some kind (to an educated magus, at least). Plus the place is talked about by Strabo, Ptolemy, Macrobius and a bunch more besides. So I think magi would be able to get a pretty good, if incomplete, idea of the place. I expect they'd probably misattribute the intact temple to some god besides Bacchus (that could be a story seed - angry faerie Bacchus appears to admonish people for confusing him with Jupiter/Mercury/Helios...). And get a whole load of other things wrong as well, but they'd be able to figure out it was the temple complex of antiquity without much difficulty.

A bigger issue is the fact that the temple complex was being used as the citadel of the town at the time. Not the easiest place to investigate.

If faerie bachus is still around after not being worshiped for that long. If so it might have a faerie aura which dominates the magical one from centuries of rituals.

@silveroak Hancock (I believe) asserts the Heliopolis was built with methods from a prior civilization that was nearly wiped out in the great flood circa 10,000 years ago.

@Argentinus that is super cool. I wonder if there's a single book dedicated to this site, or even another book with a dedicated chapter? (I mean, probably, but I'm not a romanologist.)

I do think Niall Christie did his best when writing the Blood & Sand book, but compared to the high quality of 5E Tribunal and Area books, I would love to see a redone 5E version of the Levant tribunal.

I only know that stuff because I coincidentally did some research into the place a few months ago. I imagine that the site is covered in some archaeological books covering Roman Syria, or dealing with Canaanite or Roman religion but I didn't find one with a quick search of the library I have access to and I didn't look further than that. I think there is a book published from the results of the original excavations around 1900, but it's in German.

The woodcuts I posted above are from an English language book though - "The Ruins of Balbec, otherwise Heliopolis in Coelosyria" by Robert Wood. You can find a full copy on Archive.org. It's really just a bunch of pictures and explanatory notes though.

I get most of my info by reading around online, finding a semi-relevant paper on google scholar, and then following chains of references, but that's not much help unless you have access to a library with journal subscriptions unfortunately.

I've had difficulty in finding comprehensive English language sources for stuff in the middle east before. A lot of published material is in Arabic, French, or German often without an English translation available.

@Argentius Great suggestion! I do have access to a world class e-library through my work, and have done so for other questions in the distant past, actually. If approached the librarians at my work about Heliopolis I could likely find something. That or email someone in the classics department (who I don't know).