I'm having a few difficulties getting it to accept characters that are (as far as I can tell) legal builds but who keep coming up with the wrong number of Character points or not having the right Arts for the spells.

Character points?
I’m fairly familiar with MetaCreator. Used to love it now I find it limiting. I still use it.

Yes, at some point Metacreator got a few concepts wrong. Eg. Warrior makes Martial Abilities fully available, not just those 50 points. However, your can override any warning you like in Metacreator.
Any warning I've encountered, anyway.

One problem I've not been able to find a solution for is there seems to be some sort of bug in the Spell Design system.

One of my players wants to start with non-standard spells.

There's one in particular which by my reading of the rules is valid but I keep getting a notice about unfullfilled prerequisites for inventing it.

I was hoping I'd be able to use Metacreator as a book-keeping facility to make sure I'm doing character advancement right. Not solved the problems yet.

Did you set the covenant aura?
Was the spell done with Design Spell or Invent spell?

Also being specific with your issues can be helpful. What’s the spell? TeFo, Base, RDT.
What are the components of lab total for that TeFo?
Because often times for things like this MetaCreator is correct.

(This assumes that the character was a member of this covenant when they learned/developed the spell but hey...)

Here's the set up of the spell: 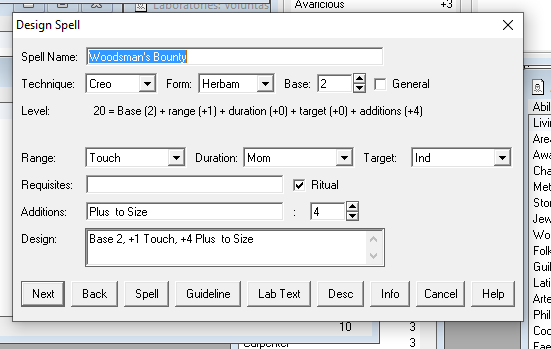 As you can see I was using the Design Spell option.

Here's the objection I got when I pressed Next:

Suggestions as to what I might be doing wrong?

I’d call this a bug, because it should be the greater of computed level or 20, not 20+cost of additions.

Assuming your base is correct it looks like it would come to 15th level and should then be bumped to 20 for being a ritual.

So I get to ignore the additions to a ritual spell unless they bring it to above 20?

I can live with that I suppose although it feels like cheating. Also feels like it leaves the spell not properly recorded in the system but what the hey.

What's the difference between Design Spell and Invent Spell?

You’re not really ignoring them. If you were to cast that as a spell with other than momentary you’d calculate it out as normal. Rituals are the same way, except they have to be at least 20th level.

Invent spell advances the season. Design spell allows you to simply add it to the character.

Thanks. I've now got to go and figure out why the program thinks (almost invariably) that the character is using too many points in Arts and Abilities. Grrrr. Snarl.

I may have to abandon my intent to use Metacreator to manage the campaign. This will irritate me.

Thanks. I've now got to go and figure out why the program thinks (almost invariably) that the character is using too many points in Arts and Abilities. Grrrr. Snarl.

Send me the character file? I'll look it over, and you won't have to get annoyed.

One of my players wants to start with non-standard spells.

If the player designs the magus from scratch the standard way, this is covered by ArM5 p.32 Magus Only - Apprenticeship.

Designing spells at this time does not need labs or aura, nor the Metacreator Design Spell mask you show here.

Just open in the character file (with Data -> Spells) the spells, then (with Tools -> Select Items) get a list of the available spells. Take - just for simplicity's sake - a CrHe ritual like The Bountiful Feast. When you select it with a double click, some Requirements mask like the one in your post may appear. Click OK in that mask, and it disappears. Now you can edit The Bountiful Feast into Woodsman's Bounty, with perhaps an addtion to size of +5, not only +4. Then close that spell with OK in the spell mask, and it becomes a spell in the character file.

Over the past couple of days, Tellus has very nobly helped me with two of the characters I've been having difficulty with.

Part of it was operator error: me entering Abilities multiple times or giving the character Abilities higher than the player had requested.

Part of it was a player who hadn't noticed that Poor affects your starting character points.

Part of it was the fact that though the program wants you to buy childhood skills seperately you aren't forced to keep a separate pool of points nor to do the childhood abilities first.

And the difficulties with the spell design system seem to be an actual bug.

I am planning (despite all this) to try using METACREATOR to do a Create An Ars Magica Character segment on my podcast IMPROVISED RADIO THEATRE WITH DICE. Without the aid of a net!

Many thanks to Tellus for his noble aid. I owe him a beer if we ever meet at a Grand Tribunal.