A thought I had that could make commentaries more interesting- when a mage has an emotional response linked to a personality trait (for example a wrathful mage writing a scathing commentary of a summae) the chracter's personality trait be added to the quality of the commentary. Thoughts?

It seems like a fun rule to play with but I'd be afraid of throwing too much at the players. If they're feeling at all overwhelmed by the game, this sort of thing wouldn't give them joy.

Perhaps characters who read those special magic aligned books could receive bonuses when studying the elemental forms (Aquam, Auram, Terram, Ignem) based on their personality traits (Bonus to ignem for choleric personality traits).

I worry that the value of the personality trait may be too high to simply add to the quality of the writing, as taking as much as a +3 is entirely free at character creation. Perhaps allowing the possession of an appropriate trait to act like a specialization, adding at most +1 to quality? An attribute which gives a benefit equal to a virtue should actually require a virtue.

Maybe 1/3 the personality trait? I started this with the concept (not even an actual character mind you) of an academic with the wrathful flaw who would lash out by writing scathing commentaries or letters regarding people who had upset him.
The idea that he would write better commentaries when thus enraged was a concept I was looking for further input on in terms of a general rule.

I would propose allowing "wrathful" (or similar) as a specialty to Profession (scribe), in that case. Granted, most people will prefer "Hermetic", but maybe there's a mage who likes heavy-handed put-downs to other penmanship.

Alternatively: offer the bonus, but an equal penalty to all writings that don't use that particular sentiment.

The only problem with that is that there is not, per RAW, any ability which adds to the SQ of written materials.

TBH, that's fine with me. Qualities are already plenty high.
Especially with Covenants.

Personally I feel it was a mistake not to have this be ability based, even if it meant replacing the flat +6 with an ability...

Fourth edition used concentration
Looking back, it was probably abusive. We certainly had several characters who boosted their concentration into the stratosphere to improve their study totals, it payed for itself over time.

Am I missing something? There's good teach for +3, and communication is added to the +6.

I'm just saying that instead of a book's SQ being Com+6 (+bonuses) it should have been something like com+craft(book writing) or something similar. Maybe base it on teaching.

I'm just saying that instead of a book's SQ being Com+6 (+bonuses) it should have been something like com+craft(book writing) or something similar. Maybe base it on teaching.

Why?
This is not meant as a counter statement or a 'that's a bad idea' - but you provide no reasoning, which I know means I will tend to discount your post, and I'd rather like to know why.

Fourth edition used concentration
Looking back, it was probably abusive. We certainly had several characters who boosted their concentration into the stratosphere to improve their study totals, it payed for itself over time.

That matches my (very limited) experience, as well as what @Christian_Andersen has mentioned about his (rather more extensive) 4th ed saga.

Because I believe that book writing should be an ability, or related to one. I can see where a person who is a good teacher might write a better book, cerainly there are abilities for writing artistic books, the ability to provide instruction in person is an ability, it makes no sense to me that the ability to convey information by writing should be static and something that a person cannot improve through practice or education. That a 16 year old with com 3 who has never written a book before will produce the same quality book as someone who is 116 and has written scores of books and made a study of writing books is simply ludicrous.

The rules in Covenants p. 88 state: 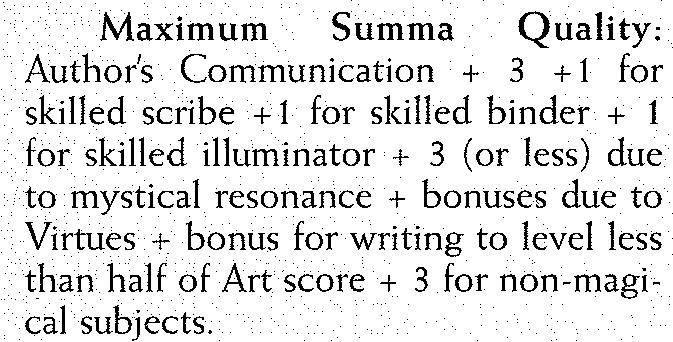 Of course, this doesn't fully address the issue, and I can see having a Scribe, Binder, and Illuminator adding maybe +1 per 3 ranks,

That matches my (very limited) experience, as well as what @Christian_Andersen has mentioned about his (rather more extensive) 4th ed saga.

Yes, as Tellus said, I played a fairly long running 4th ed saga. Two actually, but the imbalance was clearest in the second saga, where there was a notable gap eventually between the characters played by the two most rule-optimizing players and the two least.
When studying books, you added Int (which the optimized characters had at +3) and Concentration (which the optimized characters focused on). Also, book study exp for abilities was study totals/5 rounded down, so you could also optimize whhat was studied when, and whether you should wait with a given book until Concentration was raised a level.

We even tried to remedy this with a house rule, where you would gain an exp in Concentration for a season of reading, if you could roll higher than your level on a simple die. A catch up mechanic favouring those with the lowest scores. But since luck played a role, it did little to even out the differences. Also, those character with the lower Concentration abilities used less time reading books, so they had fewer rolls to get free exp.

Using an ability to govern how good your book is written makes sense, but creates other challenges. Now magi need yet another ability to sink their exp into.

In mine and @Tellus' saga we tried to avoid making to too easy to copy books on arts and arcane abilities, so we required the Gift to be able to do this. We felt that using too many mundane helpers devaluated the mystique of magical books, and that is was too easy. Eventually in our saga we realized it created too much of a challenge, because they'd need Profession (Scribe) and that was a point sink.
We then decided that a magus needed to spend time overseeing the copying, but that a mundane assistant's score in Scribe may be used.
So IMHO a magus does not need yet another ability to use when writing books. You already need Latin at 5+ to write, but who raises it higher? That is expensive, but if you want a sliding scale for book Qualities, rather than just Com plus the binary choise of Good Teacher or not...Something like Artles Liberales perhaps? It is an ability magi already have, at least at score 1. And/or add Latin-5, or minus some other number to reflect what the lowest quality you assume will be written.

So, magi need Latin 5 to write a book at all, plus Artes Liberales 1.
Quality is Artes Liberales + Latin-3 + Com = 3 for the minimum of an average magus. Plus the +1 for each of Binding, Scribe, Illumination.
I would then change Good Teacher to only apply to Teaching or Training (and perhaps give +1 Exposure exp to an assistant).
And the magi wanting to write high quality books can study Artles Liberales and Latin to higher scores than the minimum.
Of course these can be raised to ridiculous levels, especially with Affinities.
Adding Puissance, potentially twice, would any semblance of balance. In fact, using another Ability would also risk this, but it's no worse than Good Teacher, so if you change that virtue to avoid stacking...

It's not an easy thing to fix