Plate versus Plate and Mail

OK. I'm no SCA member, but it's my understanding that the weakness of the platemail was joints and cracks could be used to puncture the armor, and this was made more difficult by the use of the underlying chainmail. Given the description of plate and mail as "better overall protection," shouldn't it have a Prot higher than 10? Or is the Plate Prot 12 too high? How much worse was the ancient, all-plate harness than the cool 1400 plate?

The real reason I'm asking is my character has acquired some scales of a might 60+ dragon and plans to magically create a suit of armor from them, and I want to have an idea of what the suits Prot will be.

"Plate and mail" is mail, with some plating on it. It looks like this:
en.wikipedia.org/wiki/File:Modern-armor-suit.jpg

I think your concept of "Plate and mail" jumps right to the Gothic/Maximillian plate example and skips the "some plating" stage of development.

Plate armor was used by the ancient Greeks, who didn't know mail, and did not protect the joints at all.

Mail was invented a bit later (about 500 BC by the Celts, I believe), and was generally superior (lighter for a given protection, full coverage). This was used by the knights of the early Middle Ages. There was no real incentive to add plate on top of it, because it was already sufficient to turn most blows.

Between the 12th and 14th century, (iron) plates began to be added on top of the mail, resulting in plate and mail armor, which was indeed better than the ancient all plate (with no mail) harness. This was partly a result of the development of better bows and of crossbow, with stronger armor needed to keep the knight protected.

Around 1400, the first suit of full plate, with articulated joints, appeared in Italy. Anyplace not protected by the plate (armpit, groin) was still protected by mail.

You confusion comes from the fact that 'plate' in the two sentences you quote can mean either the 1400s "full plate with articulated joints and mail as needed" suit, or the 1000 BC ancient Greek-type plate harness, with no mail, no articulated joints, and usually less protection than the late Middle Age type (not least because bronze is heavier than steel).

If your saga takes place in the 13th Century, then you should use the plate and mail as base for your armor, unless you somehow get hold of an exceptional armor maker and push him to get innovative in his designs. You would use your dragon scales to make the plate parts, and use regular mail for the joints. Starting with the 15th century, the full suit of plate should be available.

If your scales are very small, you should look at scale armor instead (generally equivalent to chain in protection).

Starting with the 15th century, the full suit of plate should be available.

Probably during 14th century if you search enough. More generally available in 15th. Its arguable when and where the first came about. (which means plenty of wiggleroom for them to appear whenever the SG wants them)

Definetly. And the really late style of full plate, the ones strengthened to resist heavy crossbow bolts and gunshots, those can take a massive beating. Infernally heavy though.

Given the description of plate and mail as "better overall protection," shouldn't it have a Prot higher than 10? Or is the Plate Prot 12 too high? How much worse was the ancient, all-plate harness than the cool 1400 plate?

We're talking about the Armor Table in Lords of Men, which includes armor from a broader range of historical periods than are in the core book.

In my opinion, the Prot +10 for plate-and-mail and the Prot +12 for Gothic plate are about right (which makes sense because I wrote them

). Really when Prot values get that high I start to worry about the game balance considerations of armor that good. In my opinion, Gothic plate was crazy good: it was designed to protect against steel crossbows and handguns.

The way I look at the ancient, all-plate armor is that it was inferior to chain mail. As soon as chain mail came on the scene in late antiquity, everyone abandoned plate harness in favor of mail. (Roman lorica segmentata is lamellar, not plate.) Plate did not make a reappearance until the 13th century (exactly when depends on what books you read). So I designed the ancient, all-plate harness to be generally inferior to mail.

So for your character I would recommend plate-and-mail with a Prot bonus for the plates being made out of dragon scale. 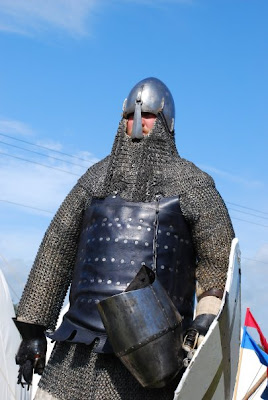 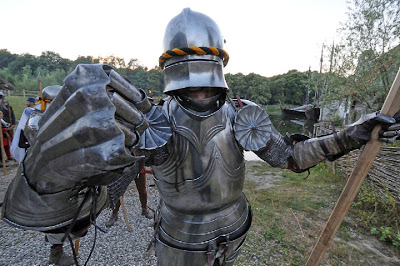 My experience of them is the plate armor is easier to bear but there is a higher risk of heat exhaustion.
Protection wise, strong piercing damage form arrows or lances can break the ring or the rivet in a mail and blunt force from clubs at elbows or shoulders can break bone without penetrating the armor.
Often the plate of a “gothic style” armor was of steel instead of just iron and hardened by heat quenching, making it 2-3 times harder than an iron plate.

Just to reinforce Andrew G's comments about 'when' the game is ran. (I AM a former SCA member and sealed knot member etc....)

Towards the mid to end of the 13th Century there was the start of plating coming onto the field. but you have to realise that this was generation 1 of the armour. It didn't neccessarily do much more then act as a slight addition to the protection of the chain. It predominantly had a strong edged against the increase of Blunt force trauma weapons which were on the rise. However it wasn't particularly tough metal (in relation to modern steel), because tougher metal meant thicker metal, it also meant increased weight leadting to a much greater trade off of mobility for protection then even chain armour brought.

It was only later generations which started using more roman tricks such as arching, feathering, angling and shaping. Which made the armour better able to deflect blows more effectively with less weight.

As craft and knowledge about the armorers craft got more and more advanced, the armour did more and more with less and less. I would say something like a late 14th/Early 15th Century suit (the 1st real full suit as such) would be lighter then the full suit of chain but because of the way it worked much better. For this I'd drop the load and increase the protection again.