This past easter I went to La Garrotxa, a volcanic area in the centre of Catalonia. It also happens to be the political centre of the formation of Catalonia as a political entity starting with the Iberia Mark stablished by Carlemagne. As such, it sseems perfect to stablish a saga. Eventually. The presence of at least 2 perfectly kept medieval city/villages there (BesalÃº and Santa Pau) makes it much more interesting to set the mood as well, but that is secondary.

The important thing is that La Garrotxa is a volcanic area. I took a balloon tour and couldn't keep myself from spotting at least 3 high magic auras while perched up high in the sky in that magical Auram creation. One of the most obvious ones has been covered by a Divine aura, but MUST be a magical aura if you remove that pesky church. I have no doubts it was put there to hinder the previous magical aura by an overjealous servant of the Divine. Filthy little bastards.... The said location is no other than the crater of the Santa Margarida volcano.

As you can see, the crater is quite circular (possibility for HUGE ring/circle spells?) and the brim of the volcano can easily nerf out unwanted sounds, like those of church bells (thus, keeping a magical aura in the inside part of the volcano crater).

The aura contains a number of volcanoes (40 in the whole county), and in the middle ages would have been quite rugged.

In fact, right now it is a protected natural environment and it contains some quite forested areas.

BesalÃº, inclusding a nice jewish quarter and a medieval fortified bridge as well as a 12th century hospital run by the order of the hospitalliers

Santa Pau: 1 km from the volcano herself and AMAZING for inspiration once you are walking through its streets. I think I spent something like half a Gb of memo of my mother's digicam there....

Got carried away writing that. The magical questions coming later.

EDIT: Just saw the photos in my mother's camera. I think I will substitute quite a few of the above with those since they are my own copyright AND better than the ones shown above in some cases.

Allow me to share a few of my own. Early autumn, in the hilly parts of Toscana.

Overgrown fortress... fallen covenant? Or inhabited by a herbam specialist? 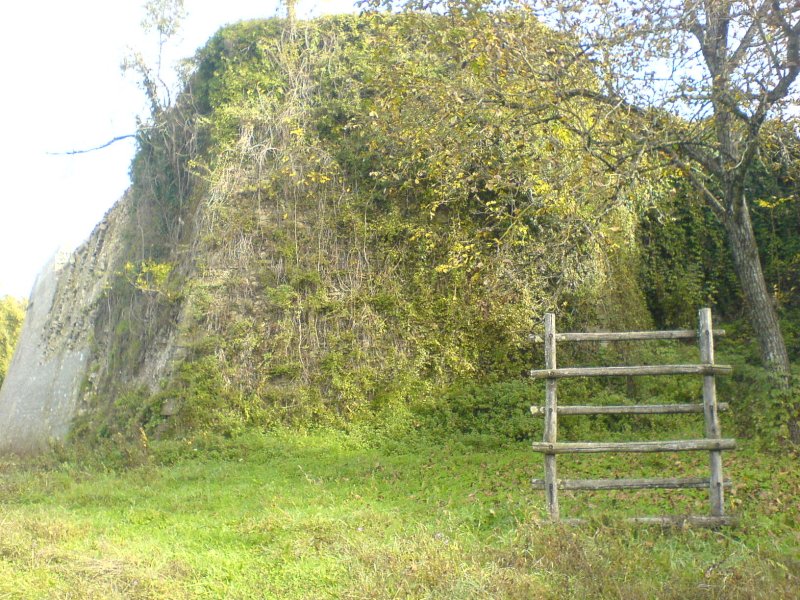 I have a small suggestion. Due to the nature of forums, this material is sadly destined to be buried eventually. May I suggest that if these photos were accompanied by a short write-up, they might make a suitable piece for Sub Rosa or SHR?

Actually, that goes for a lot of the material that appears on this forum...

Heheheh. Glad to know I am not the only one walking around and "spotting auras" and supernatural stuff.

It would be quite easy to define a "val du bosque" style ready-made saga setting for the Garrotxa area. Might look into it. There would be an easy rotation for fae courts just in their doorstep as well, in the massive beech forest (UNESCO humankind heritage, IIRC) that stands a few kilometers away from the area.... But first I already have to finish an article for Alex since before issue 1 came out

That was not the original intention of this post, though.

My concern was to deal with 2 things. First, auras. Second, the shrouded glen spell

1) AURAS
In the volcano there is a church. I assume (in an Ars Magica sense) that the church would be inside the volcano for 1 reason: supplant a magic aura.

As the church bell toll can be heard inside the whole crater, the dicvine aura would spread throughout the crater. As such, it is likely to be there nullifying a magical aura. The shape of the crater is too perfect NOT to have a magic aura.

I would also assume that the need to have a church INSIDE the volcano would be that the nearby church bell of Santa Pau cannot be heard inside the volcano.

My question would be, how far can a church bell be heard cross country?. In this particular case the rim of the volcano crater would stop the sound, but just in case.

2) THE SHROUDED GLEN
If a covenant was to be located in the volcano (instead of the church), I would assume that some kind of protection system like the shrouded glen would be present. Otherwise the location would be extremely vulnerable to mundanes peering over them.

Problem is that the inside of a volcano is easy as hell to reach: keep going up until you reach the border of the crater. Go down once you have spotted the interior of the crater. As such, the shrouded glen would be worthless 99.9% of the time for someone trying to enter the volcano. The shrouded glen makes people lose their track and skirt pass the exact location you want to protect, but that assumes that the environs are very similar to the place you are trying to protect. This is not the case since a volcano crater is massive and difficult to miss if you want to enter it.

So I am searching for an alternative here. How would you make the access to the interior of such an obvious thing as a volcano rather unfeasible for mundanes? If you want to keep a low profile instead of making them dread the volcano or something like that, that is.

Heheheh. Glad to know I am not the only one walking around and "spotting auras" and supernatural stuff.

So I am searching for an alternative here. How would you make the access to the interior of such an obvious thing as a volcano rather unfeasible for mundanes? If you want to keep a low profile instead of making them dread the volcano or something like that, that is.

Variant of the shrouded glen: The Foggy Hill (inspired by your picture). Just push that fog a bit up and out over the edge, and have the central part of it be illusory (assuming the covenant inhabitants like sunlight). Then losing track and coming out the other side of the hill would seem at least semi-natural.

Enchants the boundary in which the ritual is cast so that anyone moving through it is suvbbstly diverted, effectively keeping a place within it from being accidentally discovered

As I see it, simply "going up" will place you on the rim of the volcano, so the spell is not diverting you very effectively, regardless of the fog. You only need to follow the "direction: up" to get there.

My question would be, how far can a church bell be heard cross country?. In this particular case the rim of the volcano crater would stop the sound, but just in case.

Several(3+) km on most days, alot more on an "acousticly advantageous day".

Including a picture of my Sanctum in Santa Pau

and some medieval-style smithing

My own personal view on the functioning of Shrouded Glenn (and indeed YYMV) is just that ^, basically. The spell causes those it effects to lose track of direction, location and time so essentially they would essentially wander round the periphery of the volcano perhaps halfway up and would come down the other side of the volcano thinking they had climbed to the top and seen nothing of particular interest.

Have to say, Shrouded Glenn is exactly what I thought of the moment I saw that fogged in basin shot.

Hmm... but wouldn't that spell description imply a Creo requisite? You are creating the idea that you reached the top of the volcano on the victim of the spell (when he didn't), not simply diverting his steps.....

Creo casting requisite, then? Be flexible. This is exactly what the shrouded glen is intended for

Maybe some might require a requisite, at level 40 I see no reason why it cannot be simply an after effect of the diversionary process itself. Since the spell is Rego anyways, why not simply say the persons intent is subtley controlled so as to leave him/her with the belief that they had satisfied whatever it was they came to the area to see?

If that isnt enough for some rules lawyers then fine, add a Creo or perhaps Muto requisite (create an idea or "modify" a memory), or perhaps just add a Mentem requisite to cover all possibilities.

As I said, YMMV, I think a level 40 spell is high enough to be flexible in the aftermath of its main effect.

Well, I am trying to do this exercise "properly", not by SG fiat as I usually do, so I prefer to pass the forum's filter before I make a move like this one

BTW: in Santa Pau I found my sanctum

Door is awfully short, you a dwarf mage?

Well, I am trying to do this exercise "properly", not by SG fiat as I usually do, so I prefer to pass the forum's filter before I make a move like this one

In the end it really doesnt make a huge difference. Shrouded Glenn, being a ritual to be cast by all of a covenant's magi (like the Aegis), will undoubtedly be preceded by the standard Wiz Comm, so the final casting target number for the Shroud will be ridiculously small even with a requisite.

Maybe I have size +2 enemies that I want to hinder if they attack me?