Since IMS a major plot line went into a big scale conflict, where some of the compnaion characters are involved, I developed (or better said borrowed) some rules to handle that. I didn't want to play those battles in a cinematic way, like it is presented in Lords of Man, also I didn't want to go to deeply into the tactical aspects of battles, like in all the different iterations of tabletop wargames (warhammer etc..).

I wanted a quick, but realistic conflict resolution, which focusses on the strategic aspects of conflicts and military campaigns and also produces plenty of storytelling.. so I started my research of other rpgs/boardgames/tabletops and whatever.. just to find the answer back in the early beginnings of rpgs..

It was the good old Frank Mentzer's Version of D&D Basic Set "the player's companion" Within the almost forgotten "Warmachine" I can remember playing with it as a 13-year old DM, running a Solo campaign for my little brother the whole summer using those rules back in the early 90ies!

So long story short: I tried to somehow fully convert the Warmachine to Ars Magica 5.0, and I wanted to share it with you. Also I made a Excel spreadsheet to do all the math automatically, which you can have if you PM me..

Every troop has 3 stats. The Battle force rating (BFR), the battle rating (BR) and the troop class (TC).
Index:

The troop’s main commander is called the leader. Any troop can have only one leader and his skill is essential.

The leader’s commands have to be applied by his officers. Every 40 troops there has to be one officer, or else this part of the troop counts as 0.

Training has an impact on troop quality.

The number of supernatural creatures improves the battle force of the troop.

"Troop Class" is a measure of the overall quality of a force. It depends on the BFR.

Includes normal and magical forms, but not mere levitation. It applies to flying steeds as well (such as pegasi).

Should be calculated with a creature's fastest mode of movement. E.g. flying creatures should use their flying, not walking rate.

Combat: How to determine and apply combat results

Dividing and matching the forces

To use the War Machine in a battle, each side must have the same number of forces or armies. If one side has a greater number of

forces than the other side, the side with fewer forces must be divided into an equal number of armies. A player may keep the original BR of the force, and simply declare that troops have been split into separate armies.

To find out what the result of this engagement is, start with the BR of each force, and add or subtract all of the following adjustments that apply.

Troop Ratio (use only one per battle)

Only the larger side benefits from this adjustment, and only one benefit applies. Steeds are only counted as members of a force if their primary function is fighting (such as dragons) and not transportation (such as horses)

Morale (use all that apply)

This reflects the confidence of a force. Troops that fight in their home territory, that know they can beat an opponent, or are of superior quality to the foe may benefit from one, some, or all of these.

Environment (use all that apply)

Certain conditions may help or harm a force. Goblins in the daylight are at a disadvantage, as are fire giants in snow.

Terrain (use all that apply)

In many cases, the ground on which the battle is fought will give an advantage to one side or the other. Apply as many of these modifiers as fit your force. Troops properly equipped and trained or native to the terrain do not suffer the penalty, (e.g. Arabs in desert). Note that some apply only to defenders. When two forces arrive at the same location, they must stop moving. If both forces choose to defend, neither gets the defender bonus.

Immunities (use only 1 per force)

This reflects the advantage possessed by some creatures who cannot be damaged by normal weapons; gargoyles and lycanthropes are some examples.

Fatigue (use only 1 per force)

Troops may become fatigued as a Combat Result of a previous battle (see the Combat Results Table) or because of a Forced March. 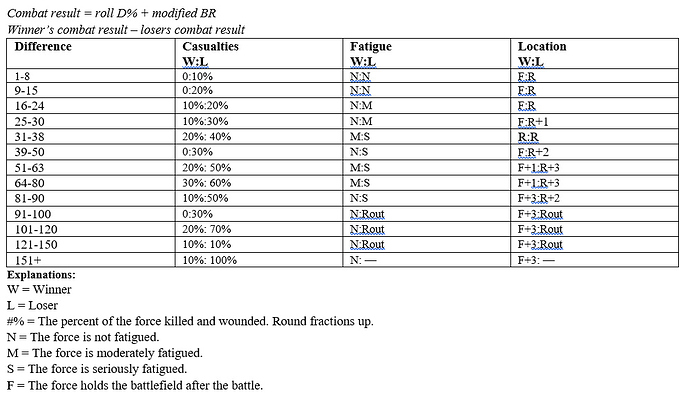 Casualties: When subtracting casualties, consider half of them as dead and the other half as wounded. When a force contains mixed troops (such as trolls and goblins), the casualties must be split as evenly as possible between them. If a force retreats from the field, treat all wounded as killed. If a force holds the field after the battle, those wounded troops can return to action in 1-4 months.

Fatigue: Troops will remain fatigued for 1-4 days. "Seriously fatigued" troops become "moderately fatigued" in 1-4 days, and will have their strength restored after another 1-4 days.

Location: Terrain units represents whatever measure of distance is most appropriate. On a hex or square grid map, this is one hex or square. If no unit of measure seems obvious, use 1 mile. If multiple forces fight and 1 or more forces on each side holds the field another round of battle may be fought between them. If some of a player's forces have routed or retreated, any that remain may choose to retreat to avoid fighting another battle. If all of the enemy forces have left the terrain unit occupied by your forces, a day of battle ends. No more fighting occurs until the next day (if applicable).

The following guidelines may be added to the War Machine mass combat system if desired. They give players the opportunity to control the battles more closely.

A good leader will select a plan before com mitting troops to battle. The success of this plan depends on the opponent's plan.
Each commander (player) chooses a Tactic from the Tactics Table. To indicate the choice, place a 6-sided die on the table before you, with the number of your plan facing up. Cover it with one hand until your opponent has also made a choice; then reveal both
choices at the same time. Use the Tactics Table to find the results. (Remember that the die is placed to reflect the player's choice; it is not rolled randomly. Written choices can also be used.) If the result gives only one effect (NE or NC), that effect is applied to both sides in the battle. If the result is two effects (separated by a slash), the result on the left applies to the "Side A," and the result on the right to "Side B." There is no advantage to being either A or B. If more than one force per side is involved in the battle, choose one tactic per SIDE, not per force.

That's it. I haven't playtested it yet, but we're looking forward to some "real" battles in Ars Magica!
Once again, if you want the pdf.file or excel to calulate just PM me.

Overall nice of you to go through the effort to dig up such an old system and translate it into ars magica usage.

Since your post is quite long and I havent playtestet it, I can only give some impressions at first glance.

Like most Ars systems yours requires a lot of reading and fiddling to figure out. Granted that I havent tried it yet, but if my instincts are anything to go by (and so far they have been for ArM) I would need at least a couple of hours of simulating battles and creating units to confidently use the system. That is a somewhat high bar to entry but on the other hand that is kind of what ArM is all about and it does seem to me that all of the complexity does buy a lot of flexibility in the system.

I am not happy about your tactics because the situation you have created is too much like rock-paper-scissors for my liking and does not take scouting or other forms of superior information into account. Especially things like magi who read the opponents mind and determine what the opponents plan is, or use some form of foresight to determine the best course of action.

My favorite mass combat system is the one from L5R. It is somewhat cinematic, with a skill+stat+modifier roll for the commander, but focuses on the PC's "combat opportunities". A friend of mine had ported it over to Pendragon for our campaign and it worked surprisingly well.