The Bright Ages: A New History of Medieval Europe

The Bright Ages is a new history of the Middle Ages, surveying a thousand years from the 4th century to the 14th. It focuses on the way communities intermingled and ideas were communicated, and attempts to shatter many illusions about the period. Long-time players of Ars know the medieval period to be far more vibrant, learned, and well traveled than the “Dark Ages” moniker would suggest, so we don’t really need to be persuaded, but there’s a lot in this book to love. A couple of chapters dwell on 12th century Iberia, for example, another on the 1st and 4th Crusades, and a section on democracy and the many ways in which people in the period voted and used voting to retain their own power is especially illuminating for fans of Order of Hermes politics. The book also includes a very useful guide to further reading that turns into a survey of recent medieval history on a host of topics, so it’s great for research.

Also, one of the co-authors is a fan of our game. 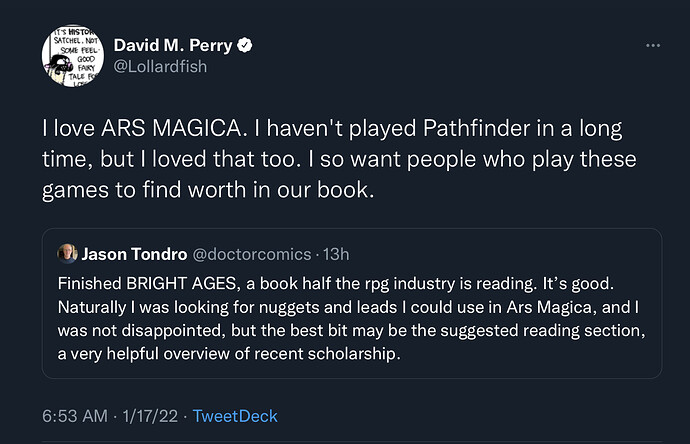 Yes, I've been seeing a lot of "the Middle Ages aren't so bad, and may have been even better than today" going around lately. I still wouldn't want to live there unless I could afford protection from people, a clean environment, and something to read. But this is a game where you play as literal wizards who start out pampered rich so that shouldn't be a problem here. ; )

Besides my opinion, I have seen mention of said book on my favorite (and only) scholarly webjournal. In short, "good book, but absolutist and ad hominem in tone. So you know, perfect for the Middle Ages. : p

may have been even better than today

Well, time to die a double widower, grandfather, my back broken by mud grubbing for free at the behest of my liege lord, at the ripe old age of 34 from an epidemic which would be curable by 20th century Medicine...

For the record, the book argues nothing of the sort.

I might have to look at this book. At least one of the authors clearly has excellent taste.