The Lotharingian Tribunal of 1232

Should anyone be interested, my last session was the first session of the reformed Lotharingian Tribunal. It was hosted by Florum's chapter house near Brugges somewhere convenaient for everyone to attend, and it is taking place the day after Saint John's.

The Lotharingian Tribunal of 1232

Location: a large field between Bruges and the sea (about an hour’s walk inland from the lighthouse of Blankenberger), the local Church is that of Sint-Jan-op-den-Dijk. 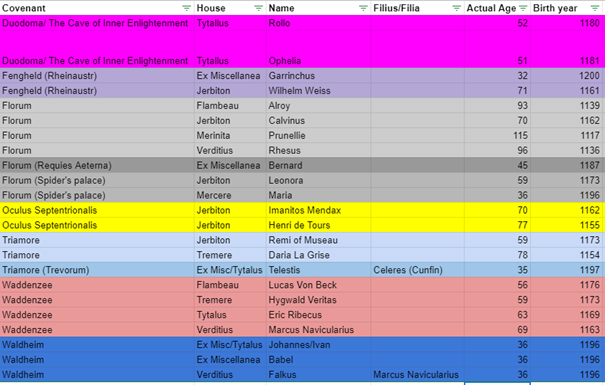 To give more info:

A well-made cart carved out of a single huge tree trunk, with space for a horse, ox or donkey in front. It moves as normal cart would, but without the need for animals. There is a branch un a strange cross shape, used to control the cart. (nb. the players have seen another version of this being used, as both Peter von Wurzburg and Wilhelm Weiss have one and go around with the back of the cart normally filled with wine barrels)

An ordinary barrel decorated with images of vintners and brewers working their crafts, and their tools.

Rego Herbam 30 24/day R: Touch, D: Mom, T: Group
Placing a selection of food (vegetables/fruits) inside this pot and closing it, the user describes the recipe they wish applied to the food, which is instantly processed and transformed into the corresponding (fruit)wine/beer. The resulting dish is as described by the user, and limited by his knowledge (or imagination) and quality of description. The user must make a Communication + Finesse roll or a Craft: Wine or Beer roll (at +3 Ease Factor). The drink will be at least technically edible (if edible materials were placed within), though a poor Finesse roll may result in a less tasty drink than hoped for. (Base Level 5, +1 Touch, +2 Group, +1 ﬂexibility, +5 for 24 uses)

Rhesus of Florum (An)

A beautifully made shirt, it is made out of the absolutely finest silks and would not look out of place on the highest nobles. Two main colours are available: Aquamarine blue or Imperial Purple.

A riding cloak made of excellent wool and dyed red in the manner of ancient legionnaires. Only one colour is available right now, enquire for more.

A metal reinforced leather armour, whose studs are gleaming brass. Only the chestpiece is enchanted, but it comes with matching helmet, greaves, vambraces etc

Isn’t selling anything, has a massive order list of waiting covenants. Will show anyone the Nebelkoenigin, for the sake of showing off. States that both of the Primii in Fuldarus have ordered ships from him, as have the Tremere in Stonhenge.

Maria has a steward ready and available to book transactions in vis, currency, raw materials, text…

The news is relayed by several of the Jerbitons. Under the sponsorship of their domus magna (Valnastium), to whom all orders should be addressed, House Jerbiton offers any Covenant in the HRE who wants a copy of the Sachsenspiegel, the new lawbook, for 2 pounds. They assure that it will be a comprehensive summa of relevant Laws. It will be available in both Latin and Low German (Saxon).

A number of weirdoes, magic/faerie touched people, never-do-wells, out of work mercenaries are available for hire. Parents trying to pass off their “weird” children to the mages.

Specific examples: three Flemish halberdiers who got kicked out of the blacksmiths-militia, two Welsh longbowmen, Dan the Dowser from Picardie, an incomprehensible lost sailor from Frisia, Jute&Gerrit two mummers from Utrecht, a lawyer named Simon… (Lots of Grogs)

The question of Gilds

Whether to keep the Gilds systems in this new Tribunal?

Result: aside from a few abstentions, all vote in favour

The question of mundane ressources

Calvinus ex Jerbiton: Florum was unfairly penalised by the Normandy Tribunal in the 1081 Tribunal ruling which forced the closure and dismantelement of their linen manufactor, which brought the Covenant to near ruin. Mages are a part of Europe and cannot be expected to only live off the land like farmers of yore. Restrictions on the use of magic to sustain the Covenant, so long as it does not contravene the Oath of Hermes, should be lifted.

Result: aside from a few abstentions, crushing vote in favour

The question of voting and Sigil holding

Who gets to vote?

Result: Everyone in favour of abandoning Rhine sigil holding.

Rollo ex Tytallus, of the Covenant of Duodoma also called the Cave of Inner Enlightenment, would like to take the floor to bring up some issues that he and his Sodales Ophelia of the same house have born witness to or been made aware of.

-They humbly suggest for an investigation into the Chapter house of Trevorum, who, some might say, have been interfering with mundanes, in particular giving undue help to the Baron Arnold the lord of the castle of Elz against the Count Gerlach of Veldenz and in hindering the tax collection of the Archbishopric of Trier. While no formal complaint has been made by the archbishopric to date, it would be better to investigate this before the church gets involved.
Result: Daria volunteers to investigate her chapterhouse and make a full report

he island on the Rhine commonly known as Pfalz belongs to the barony of Oberwesel, the heiress of which has been recently roused from a supernatural slumber. She was plunged into such a slumber around the year of our lord 1222 by an agent of the Winter Court, which resides just north-east of Koblenz. They can attest to this, having both attended such a court once and broken this curse. Coincidentally, this is the year that the Covenant of Waldheim begun, in collaboration with said Winter court, located within walking distance of the Covenant. Surely this is too much of a coincidence to not investigate. This alone while not fae molestation is probably meddling unduly in the affair of nobles.

Now, this island has been the victim of suspicious magical activities: on two occasions it was attacked in the dead of night with weird screaming and noises witnessed by the villagers of Kaub. After the first assault, all the inhabitants of the island were found dead, either killed with weapons or in some cases seemed to have had their faces crushed with great force but not in a way usual for a weapon. After the second assault, a new lordling was put in charge of the island, and the known bullfighter of Bacharach, a known local party goer, a foreigner by the name of Babel was observed to dwell on this island. This is quite serious; do you not believe?

I could scarce imagine that such an esteemed member of our Order would stoop to such blatant meddling, and additionally, deny the Baron of Oberwesel and his line of the island and castle that has belonged to his family for generations. I must suggest that our Quaesitor investigate this, without haste but with discerning.

Waddenzee and Oculus in the same Tribunal, just that sounds like a recipe for lots of shenanigans

once again you make a brilliant contribution with your well written descriptions of play sessions and thorough description of how you ran the session, what you planned and why.

A brilliant resource for any aspiring game master intending to run a tribunal game. Bonisagus will know I have wanted to and struggled with the idea.

It is. The pot is simmering, but I have plans for the end-game ( code named Götterdämmerung).