What? Tactical movement? In my Ars Magica game?

That's right, I decided to make up a set of rules regarding some amount of tactical movement. The intent is for these rules to be simple enough, but provide a decent backdrop to a battle. It is largely abstract. 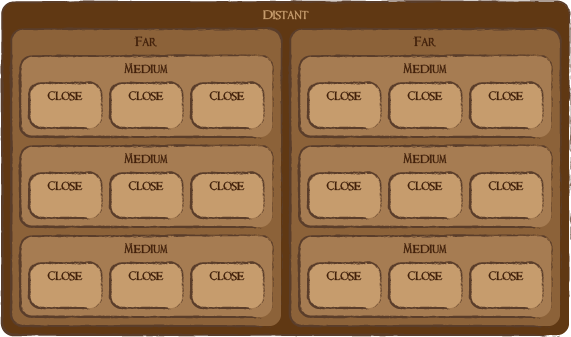 A Close group is a single scuffle on the battlefield, one "group" of combatants. It is approximately 5 paces across.

A Medium group holds three Close groups. It is approximately up to 15 paces across.

A Far group holds three Medium groups. It is approximately up to 50 paces across.

A Distant group holds any number of Far groups. It is above 50 paces across.

Moving between groups takes a Reposition. You get one Reposition as a fast action (Lords of Men), or one Reposition in tandem with Disengage or Charge. You get two Repositions when dedicating your main action to movement. Additionally, you can double the amount of Repositions by spending a Fatigue level.

It takes one Reposition to move between Close groups within the same Medium group.

It takes two Repositions to change a Medium group within the same Far group - one to leave the Medium group you are currently occupying, and one to enter another Medium group, automatically sliding into one of its Close groups.

Similarly, once you're outside a Medium group, you can step outside the Far group, then move inside another Far group, and finally move inside one of its Medium groups (thus occupying one of that group's Close groups). The whole maneuver therefore takes four Repositions.

Movement between Distant groups is resolved narratively, or by actual ground movement speed (Lords of Men).

Realistically you'd never see a fight with more than one Medium group, but there may be exceptions, such as an archer hiding in another Far group (thus approximately 50-100 paces away).

The exact wording of how repositioning is supposed to work could use some ironing out, but that's the basic premise. As a bonus, you get clear distinctions between Groups of combatants, all enclosed within a Voice range.

So, I'll be honest, my first reaction was, "What? Tactical movement? In my Ars Magica game?" But honestly, I don't mind it! I'm probably never gonna use it, but considering I expected to feel virulent hatred and instead feel entirely neutral about it, you've done impressively well.

This reminds me of Professor Dungeon Master's "Ultimate Dungeon Terrain". It is a circle. Those in the center are in melee range, those on the outside are in close missile range.

If you had used circles it would have probably been a lot more difficult to do the graphic, but would be easier for those of us who play Theater of the Mind to actually make useful.

So, like the circles representing Close groups IMO should be arrayed in a 3X3 cross, enclosed in a larger circle representing Medium, etc. and continue outward.

If I can figure out how to redo this in a graphic using circles it could actually be really useful for our game at least as a visual aid, now I think about it. In our modern setting firearms are a thing, and shotguns have damage variation over range (Close guaranteed fatal if unarmored).

That's an interesting notion, I might take a stab at it. Even a paper sketch would go a long way as inspiration, though, so feel free to share your ideas.

My isue is that I feel that at minimum medium and distant may vary depending on the weapon involved. Distant for a sling is probably medium distance for a ballistae.

It was developed for minis, but the whole zone concept translates well to theater of the mind.

My isue is that I feel that at minimum medium and distant may vary depending on the weapon involved. Distant for a sling is probably medium distance for a ballistae.

Indeed, the groups are based on solid paces, so range increments for weapons would work off the same rules as they do normally - only slightly more codified in how and where they apply.

Okay, so team 1 has a group of archers and team 2 has a ballistae, and there is a group of swordsmen moving through the battlefield. Does this have different tactical layouts based on group perspective? If not which range increments are used? How do you account for a group on horseback, which can presumably move faster?

As for groups on horseback, it's easiest to just give the horse extra Repositions per round.

You might want to take a look at the movement rules from Genesys. They are similar to your own, but handle movement better, IMO, and have more ranges (without any specific distance). It's a narrative system, so the basic framework for movement could work well.

I will take a look at it, for sure.

So by your rules a team of 5 swordsmen would be in close range with each other and thus unable to close to close(melee) range with anyone else? That seems bizarre...

The swordsmen would have to enter the same Close group as the enemy to engage them.

As for how many swordsmen can be in the same Close group, well, the core rules limit groups to 6, so it makes sense for a single Close node to hold about 10-12 combatants.

I may have to tweak a few things, so please, keep engaging. I want the ruleset to be useful.

There are several issues here- first the core rules do not limit a group to 6, they just effectively limit it to 6. You could have a dozen people in the group but the calculations will be the same as if there were 6 people, the only benefit to having extras would be if people die it will keep your group at size 6.
Secondly your group of 6 could be engaging with another group of 6 that is in front of them and then be ambushed from behind by another group of 6, so a limit of 12 would be pretending this is somehow impossible. Then of course there is flanking on the side as well. Plus someone could then ambush your ambushers, which is the fundamental problem with any cell-based model for expressing a tactical situation, there is always an edge to the cell.
On the other side it would be very difficult for 12 people to engage with one individual at melee range.

I don't mean to nitpick, but I checked and a group "may consist of one to six characters, inclusive". On the other hand, the amount of combatants in a trained group is limited by the leader's Leadership score. I'm not sure which one to trust.

You're right though, cell-based positioning might be imperfect for the purposes of flanking and such. I'll be looking into ways of circumventing these.

My reading is both are true. 6 is the largest single trained group a leader can lead but if their leadership is less than 5 the maximum is smaller (the leader is part of the group but doesn’t count for leadership maximum). When you’re talking masses of troops you’re talking about chains of command with each small group having their own sergeant-level leader. Which is not exactly represented in the trained groups rules.

6 is the largest number of people a leader can lead, but that does not stop other people from being there. Not the best tactical decision perhaps, but for example: if you have a turb of 12 which has all trained together and has 2 sergeants, but 1 sergeant has become incapacitated, then the other 5 men from his group can join the other group and fight as if they were not organized, filling in with the other group as it's original members fall. Thus while the group being led would be 6 it would be a larger group overall.

I see. It is all quite fruitful, thank you.