For the discussion of creation of and advancement of the aforementioned character.

I've read the Entering the game and character creation and was wondering how after gauntlet progression works. I only really ask this because as you know I want to get the True Understanding of the Realms virtue and it requires research. How does the Lab, Books, Vis, etc. work and what Forms + Techniques do you think the virtue would be. My guess is Perdo Vim maybe Muto Vim. If you already answered the first question just direct me and I'll go read it. Making my way through everything

After gauntlet progression works as described on the wiki under 1228.
True understanding of the realms is more of initiatory type thing than simple research... it isn't really incorporated into spells per se.

Okay I'll go read that. Also yeah the virtue isn't a simple research but it is done similarly or at least that is how I read it. If you want to do something different we can. What do you have in mind to do as an alternative?

Not sure how you got that... the thing is that it is researching the unknown- if I point out to you how to get there then you aren't researching, you are following a script.

The picture I attached was how I got to the research bit but I probably misstated what I wished to ask. In HoH:TL the way of doing research requires me to experiment. The example in the book uses a mage reseraching magic spells and then discovering something. Would I do it the same way or find out some other way of doing it? 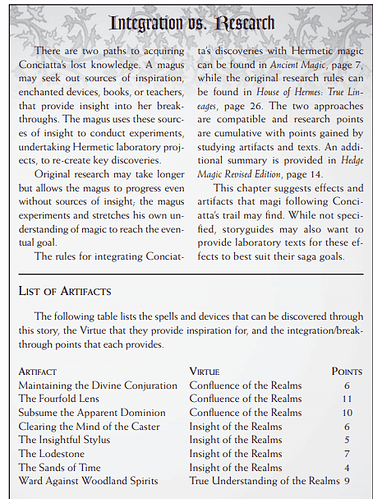 Also to further elaborate on this. The example used was the magus studying spells to affect is Parma Magica. So something that could be similar

Yes, it is likely possible to get there with spell research, but it is not going to be a direct path, and you probably need to start with InVi spells...

Thank you that is all I need! I'm going to get my character up to gauntlet then probably ask a few questions

Up to gauntlet is done

which ex misc. tradition is this?

My idea is that since the Faerie Realm adds to the Magic Realm his Faerie Blood made his Gift more prominent. Making him have to invent more since working with others would be quite difficult

I have stated that if you are not going with a tradition from the book you need to discuss creating a tradition with the SG, not just picking traits.
I want some idea of what this tradition is and where it comes from beyond simply a list of traits, and to asses if that list best fits the tradition rather than the desires of the player.
In the future the general rule is ask don't assume.

Sorry I must have missed that. I'll be more careful and ask in the future

Sorry for not responding sooner I hit my reply cap earlier. So what do you want to do about my character and I have one question then that I don't see addressed in anyone else character threads. Will we get any Vis during character gen?

You can use the standard MTx5 per yea without accumulation from the core book.

We still need to work out what your tradition is...