You guys need to figure out who is teaching what. I can say Elizabeth is assigning these, but I'd prefer that you, as players, hash out who is teaching what. IT doesn't have to be forever, but it is for the first year. Second year, when you have first and second years to teach, it can stay the same, and the different courses be taken. Students might also want an advanced class, and drop one of these classes for advaned tutoring. The exception here is on Artes, there is no advanced class for the Techniques.

The philosophy of the curriculum goes back to Bonisagus's admonition to teach the Forms, and more focus will be on the forms than on the Techniques.

When does Vim get taught? Second Year?

Based on current scores, here is what I'm thinking:

Yeah, Vim will come later. Although there will likely be some exposure to it in extracurricular activities for students, but it will be very light.

Fabrica's strengths would lie in Magic Theory and any of the Arts really. But his Magic Theory would likely be confined to application in the lab. Considering that he's with the Verditius he might have other responsibilities toward potential recruits also.

Fiona will put her name in the hat for Magic Theory (her score is 7).

She has a decent Corpus (16), but fair-to-middling Mentem and Imaginem (5 each). Her Elemental forms average 7, with nothing higher than 10 (Terram).

Not sure about History of the Order of Hermes. She has no Faerie Lore, but she has Magic Lore: 2 (if the students don't mind learning about the Niseag), Order of Hermes Lore of 3 and Code of Hermes 4.

Overview of the skills (based on current known scores), broken down by classes: 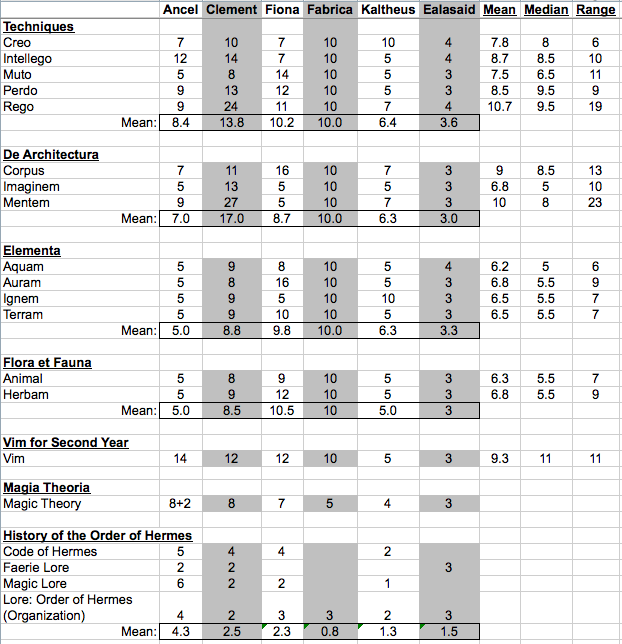 Overview of the skills (based on current known scores):

I've updated the chart and the Google Docs page for Fiona's new scores.

Awesome chart, it's great to see how all the different teachers stack up and all.

A rejiggering of abilities might be advisable to get Faerie Lore... 5 or 15 xp isn't that hard to rejigger, is it?
And it's up to you guys to decide who is teaching what to the first years. Things will change for subsequent years, and that will become more obvious.
I will also have NPC teachers to fill any perceived gaps.

I've shifted some xp around to give Ancel a Faerie Lore of 2. I'll update the magi matrix.

Edit: I've added a second chart for skills, broken down by classes. See above.

History of the Order of Hermes

Clement's arts are going to change a bit for his last 10 years and he is picking up Fairy Lore 2. Mostly his lower arts like Animal and the Elementals will go up 1 or 2

I'm finally getting around to Kaltheus's character sheet so his scores need to be updated.

Do you guys want me to decide who is teaching which class? It seems like no one has clearly identified what they are teaching, only what they can teach.

The elements seem to be meant for Fabrica, with the ability to pick up pretty much anywhere else as needed, aside from some of the Lore skills.

Well, I did make these recommendations farther up the thread based roughly on best scores. Since we can all theoretically open the Arts of a standard apprentice, this format just makes it so students learn from someone who's slightly more advanced in the subject areas:

It looks like we have six classes and six teachers, so (assuming one class per teacher and vice versa) Fiona would have her first choice being Flora et Fauna and second being Magia Theoria.

Ealasaid's player has gone AWOL, so he's out.

There's a difference between a player making a recommendation or a request and a declarative statement from a player that they will be teaching a class. If Renimar's proposal is fine (with the change stipulated by Fiona) then I can have someone else teach Magic Theory.

I have plenty of BP left to get a MT teacher if we want to. I'll leave it up to JL and the troupe.

So would an in-character delarartive statement be advised to move that along? We could post that in the new thread maybe, or perhaps start an 'In-Service Day', a faculty planning session maybe?