Rhine and Provencal tribunals don't have a border. Provencal is actually quite small in area.

Provence is about 250 miles to the south, but we are right at the border of Normandy, Alps and Rhine. There is this nice image with the rough borders of the Tribunals overlaid on a more recent map of Europe, I don't remember where I found it. It shows rough borders and approx. positions of canon covenants. 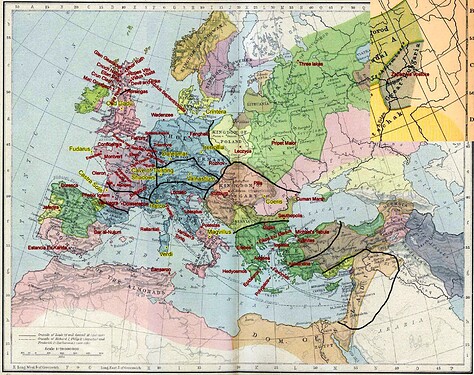 Cool map, though it should be noted that a number of those covenant sites are incorrect.

That map is a bit inaccurate, as the Provencal Tribunal (according to the map in Faith & Flame) actually goes as far north as Lyon. But that is still quite some way from Basel, which is the closest large city near Tugurium.

But the point is that no, Provence has no claim on that territory. Trying to join the Provençal Tribunal would be very hard to justify.

Nice to know it's innacurate, I didn't look at the map from F&F (or most of the others source books, for that matter).

That map is a joke - Durenmar isn't even within the black forest!

@Arthur Thanks for the clarification

@Arthur
How much more ooc stuff are you planning to write into an ic thread?
The offending thread has long been edited by the way. Sorry for not being able to guess your mind.

The way my character behaves on her approach should be for me to decide. If she decides to be extra polite and express that she doesn't consider herself a member of the covenant yet, then she can do that.

I have to sleep sometimes, you know.

Taking me to task for trying to give you all the information does sound a bit rude, BTW. Of course, that may not have been your intent.

Your latest post indicates that you simply misread, which is why I suggest you return to posting ic so we can bury this unpleasantness.

For the villagers, you are the "weird people in the valley" for now. Leonardus' last visit was over 8 years ago and he was an infrequent visitor. So for the most part the villagers were only exposed to the mostly-mundane inhabitants of Tugurium, with Julius as the steward of the place.

The only one who knows for sure that Leonardus was some sort of magus is the head of the Telsberg family, who had made a deal about forty years ago for use of the valley in exchange for some magical services (including a longevity ritual for himself and his wife).

There may be others who know or suspect, but you don't know who they are and how much they know.

That is true, but the forum does not notify me when someone edits a post, and I had made my response before you did the edition. Or maybe I was writing it as you were editing. All I can say is that yes, I had reread your initial post before commenting and that no, I was not aware it had been edited when I posted my answer.

Those things happen. Getting irritated about that and trying to assign blame is pointless. Any unpleasantness was certainly unintended on my part.

I have already deleted my OOC posts in the story topic, BTW. They will completely disappear in 24h.

Ok, just to make sure we are not in one of these weird villages where the magical nature of the covenant is an open secret.

I'm sure my character would ask a number of questions but since the othe rplayers have asked them already, I don't think I have to repeat therm.

As for clever new questions - I have nothing intelligent to ask.

That's fine and thank you for letting us know.

So far, I have focused on giving a sense of the place -- large and mostly empty, changing due to its magical nature, with the people living there being slightly unusual.

For example, anyone with Second Sight would have realized that Julius isn't really human once they saw his face, but I am also giving plenty of hints for the other magi to speculate on. (Or question Clusius about the steward.)

Just a minor note, Wolfgang greeted everyone with similar courtesy, but everyone other than Eikona set off the alarm bell so he was in the tower just in case and didn't make his appearance until later.

Except for a few mechanical decisions, Regulus is at Confluensis waiting for Augustus Nero to be ready!

Soon he will be at the council room shocking everyone with his progressive ideas (some would call it "delusion", he is aware; his pater is one of them).

EDIT: Arthur, when the time is proper will you write their arrival at the covenant? Or should I try my hand at it?

It's rare that Wolfgang meets someone who can outdo his "outrageous Pater" stories.

Is there more we should know about the actual manor house, other than the changing nature when unoccupied? Does it also maintain itself to fit it's usage? (Meaning seldom used parts are very rundown, dusty, etc.; but regular use makes parts of the building spontaneously improve?)