Fleur is in a flurry of activity well before she departs, arranging shipments of supplies to establish a temporary lab inside the cave if it turns out to be suitable to her needs, she can warehouse the supplies for later if she is wrong, and trying to recruit a small group of grogs and companions to assist her- a couple of turb for defense, anyone who might have better knowledge of the area, the people or animals would also be most welcome...

What Fleur need to do

Mission statement and plan:
Mission statement: To explore the caves and ancient art of Ibzia for indications of lost magical techniques
General Plan: The exploratory group will travel to Ibzia and set up camp near the caves. Hunters will set up traps that we might catch any animals emerging from the cave while locals are questioned about any stories, rumors or events surrounding these caves. After a day of such external observation and investigation a team will explore into the cave and ensure that the first chamber is cleared of any threats, after which the chamber will be assessed for any relics that would indicate potential mysteries to be explored. If the relics are portable they will be collected, the encampment will, if room is sufficient, be relocated into the first chamber for improved shelter and defense, and the mission will proceed to further into the cave. If the chamber is found to possess non portable relics of ancient magics a temporary lab will be constructed in the chamber instead for the investigation of these relics. Once a chamber worth investigation has been found the team will explore additional chambers with the objective of identifying and eliminating threats before the investigations are begun, though portable relics, if any, will still be collected.

People approached/requested:
Fleur will see if either Guiverna or Honorius are interested in joining her expedition.
She will ask Carlos Gutierrez if he would be interested in accompanying her in a less than official capacity...
She will express interest in bringing Faith Forest along, to see how her burgeoning expertise plays out in the real world.
Lucia is of course expected to come along to assist with cooking and other regular duties.
Epona is requested to act as her personal sheild grog (and share a tent with Lucia)
Roger is requested to captain the additional security force she is requesting, consisting of Gerard, Antoni, and Bernat, though she is willing to adjust that force at Roger's recommendation, or based on covenant turb availability..

As Fleaur makes preparations and contacts others, I am presuming a few scouts canvass the area and take note of things such as the best roue between two points, the closes source of fresh water, the idea location to set up the expedition camp, and all of that. In doing so, they make a shocking discovery. The entrance of that particular cave has changed! Ornate stonework that seems centuries old. 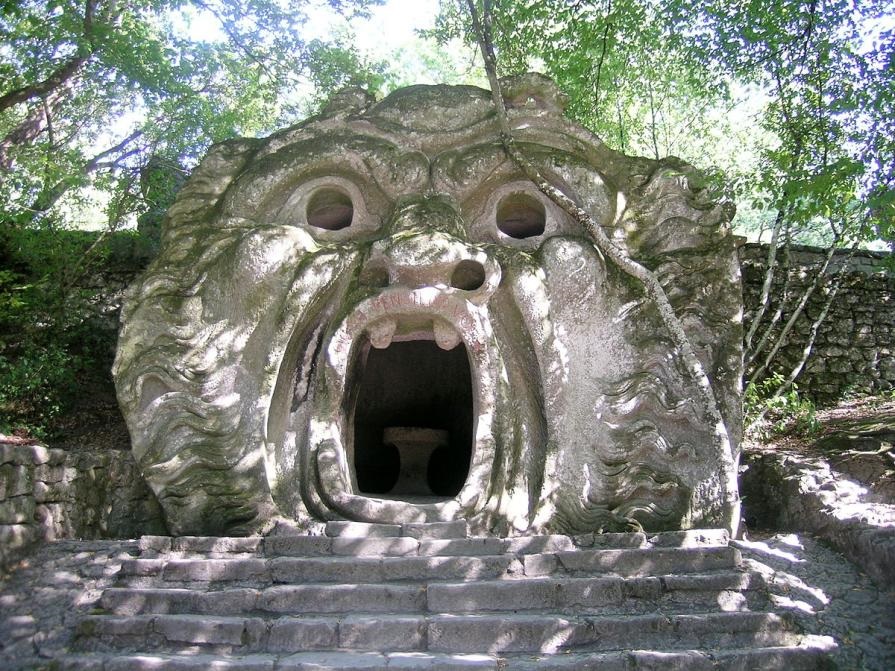 (not the stairs or wall part, just the cave entrance. The pic is from an actual Roman shrine cave. The stairs and wall were built later)

Fleur notes this, and changes the plans to test the aura when they arrive and when they enter the cave, and if possible check for regio.
She will approach Guiverna first
"I have a puzzle involving caves, and if my past experience is any guide, quite possibly some form of sentient serpent, is there any way I could interest you in assisting me with this?"

(you may want to send a direct PM to Peregrine)

She will approach Guiverna first
"I have a puzzle involving caves, and if my past experience is any guide, quite possibly some form of sentient serpent, is there any way I could interest you in assisting me with this?"

(sorry, I haven't been checking the forum as often as I had been.)

Guiverna purses her lips thoughtfully. "I don't have anything pressing that I can't postpone for a few weeks," she says as she glances at her lab building. "Certainly nothing more important than ssseeking anssswerssss about a sssentient ssserpent. And besides, a bit of travel might be quite invigorating."

Semsuhfaw, who had been twining himself between Fleur's feet, coils and draws himself up to look the maga in the eyes. "How long until you would like us to leave? I would like us to seek...proper protections for the journey?"

"I have more inquiries to make about others joining us, and preparations of my own, I think 2 weeks should be sufficient."

Semsuhfaw nods (snakes can nod? Who knew?) before he returns to Guiverna and winds his way up and around her body. He says something to her in that sibilant secret language of theirs. She replies, he says something else, she says something that sounds like a question, which he apparently answers, her hand absently stroking his head the whole time.

Guiverna and Semsuhfaw head to the crafts-men's quarter of the covenant in search of (preferably) a goldsmith; if we don't have one, someone who can make something of gold in short order.

What she's looking for (with Semsuhfaw's guidance) is a gold amulet, with the image of a falcon with a moon disc on its head, strung on a gold necklace. And it needs to be made as soon as possible.

That seems reasonable. So be it!

Fluer approaches Honorius next. "I am planning on exploring a cave system in the mountains for information on lost magical practices, if you might be interested in joining me, I could certainly use your expertise in that environment."

All right. I designed a grog to help on this expedition - where should I post him?

Okay, I feel stupid now. Who is Honorius?

Hmm... I could swear I saw a page for Honarius describing his virtues associated with mountainous terrain...
apparently I had names turned around and meant Marcellus Of Verditius, Honorius was his pater...

Fleur approaches Honorius next. "I am planning on exploring a cave system in the mountains for information on lost magical practices, if you might be interested in joining me, I could certainly use your expertise in that environment."

(I'm not sure yet what Marcellus is doing in the summer of 1247, but he will probably join Fleur.)

"It would be Guiverna, you and myself, plus some unGifted assistants. As to the caves of Xagyg, I do not believe so, but it is possible they have names I am unaware of."