"If I do decide that I would be interested, I would need to discuss it with my sodales. I wouldn't want to leave them in the lurch."

An incredibly tall, thin man in servant's livery suddenly appears at their table. "You rang?" he rumbles.

The giant groans before he turns to leave.

I’m going with this way in, I’ll include it in the Woad’s final backstory. With his start in House Merinita he has some enemies from among Cliffheart’s magi but not the entire House (Enemies Story Flaw).
Once I nail the final design I’ll advance him 1-2 years since I’d like to start play with a basic Talisman. After that the Woad was looking for a change of political climate, and that’s why he took Santiago up on his offer.

And just to note, the year begins with Winter in my calendar. Robertp's sollo aventure Dusk of the Fllame takes place in 1245. All roads lead to Africa takes place in Autumn 1244. This buts Vibria in two stories, which is maybe too much for one player.
The Exarch story never happened (that was the political one). That is now an open season for study or whatever.
See, now I remember why I almost collapsed before the Forums did. We over extended ourselves by putting the same characters in different stories in a tangled short span of time.
I am open to suggestions as to how to resolve this.

So it seems the Woad will appear on the doorstep of the Andorra covenant just before Winter 1244, with a reference from Santiago, and ready to join the expedition.
I'll post his final statblock and updated backstory in his dedicated thread soon.

Santiago appears in the early posts of Ancient History (1242). There he gives Roberto a task to rescue a colleague of his named Flavia who had been kidnapped. It turns out that Flavia found clues that she thinks will lead her to a lost Temple of Mercury and others wanted that information from her. Roberto and his fellows rescued Flavia who has now asked the group to come with her to try and find the temple since she fears that the people who kidnapped her will pursue her to the temple.

Knowing that more trouble was coming, Santiago might have sent Woad to help bolster the efforts to find the temple.

Roger. I've read through the thread of "Ancient History (1242)", and it makes sense that Santiago was up north at some point and suggested to the Woad that he could be of use in Andorra, specifically with this mission in mind. Although Santiago propably only hinted at the nature of the mission.

I think this is a good entrance for the Woad to make in the saga. Should I just start replying in that thread, and let the Woad arrive and introduce himself? It'll work even if he is only 99% designed and not yet posted.

Santiago was Roberto's mentor during the Shadow Wars. I just looked on the wiki and see that somehow we never managed to get an entry for Santiago in the "important entities" section. I'll try and correct that (though I'll trust Marko to add anything missing from the description). 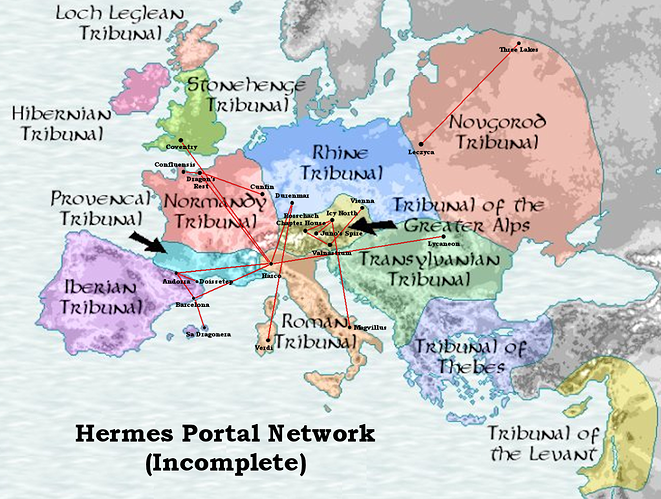 Fleur's apprentice was away in fosterage for a year or so, but she is back. She joined the covenant in 1240, I'm not sure how long before that she had trained with Vulcanus… Of course Fleur will be the one to set her gauntlet unless she does give or sell her to someone else eventually, and I suspect Fleur's written exam on magic theory could be hellacious- especially the first time when she hasn't 'dialed it in' to what is appropriate for an apprentice...

Fleur's apprentice was away in fosterage for a year or so, but she is back. She joined the covenant in 1240

Can you give me her name and any details you have so I can update the wiki? I know it's deep in the archives somewhere, but if you have it at hand, it would be much easier than me digging. There was another apprentice that was given to the older magus we traveled with, wasn't there?

And I seem to recall that Roberto was at least thinking of taking an apprentice. Did he in the end? I can't recall.

Also, FWIW, the person playing Elena (Lucas's apprentice) is no longer around. So she's floating free as well.

So, with your permission, I'll move Cecilio, Antoine, Acutus, and Solomon (as well as Gabriel, Solomon's apprentice) over to the "Former" list.

Vera Belladonna Rudolphius, I have her current magic theory as being 7+2, I have a character sheet that I at least began before it was pointed out that the level of detail I was going for was excessive given her role... she has int of 4- that also affects labs...

I'm thinking I should drop Rilcheaux, the concept didn't work out as well as I liked and I don't have as much free time to devote to him as I used to.

And I found an entry for Edith of Flambeau (the other apprentice of Vulcanus). I now recall that instead of taking her as an apprentice, Roberto declared her fit to be a maga even though she hadn't finished her 15 years. He made her a maga (with some sort of approval from above, I think?) and has agreed to mentor her and finish her training. But I understand that's not a master-apprentice relationship with the obligations and benefits involved.

I had thought it was 7, but my memory is blurry. Her sister Edith claimed Battlefield Gauntlet as I recall. Roberto took on the role of Mentor for both her and Lucien. That is why Carmen would let Lucien go on expedition with Roberto for the Ancient History story.

I was just updating the two sisters and I saw that the entry for Edith states:

Vulcanus then took her as an Apprentice (as was her sister) when he absconded in 1232.

If that's correct, then both Edith and Vera were first apprenticed in 1232 (or maybe 1233). Roberto has gauntleted Edith. But if those dates are right, Vera should be gauntleted in 1247 (or maybe 1248).