@Bartomeus please use the format from other characters. Character sheet at the top and other stuff below.

This post should be wikified. Feel free to edit and remove the instruction.

Note: 3rd Draft. Please, please offer suggestions, corrections, gotchas, critiques, "oh no, you didn't..." etc. I am still very much learning the ins and outs of making a magus... Thanks!

Reserved for Description and Background 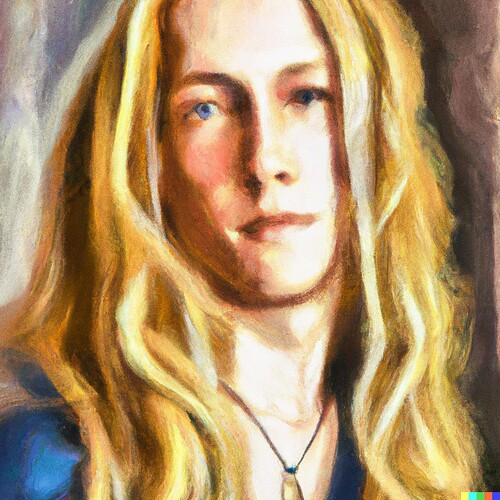 A handsome, some may say beautiful, slender young man of above average height who wears his flaxen blond hair long. His eyes are strikingly blue, almost otherworldly cerulean. He smiles with ease, though a hint of mischief dances behind his eyes and smile. He often wears snug brown leather pants and light colored linen shirts. It's not uncommon to see a flower tucked behind an ear or a small woven bracelet on an arm.

Thomas is what happens when a beautiful shepherdess of Nordic descent gets together with a capricious young lord of the Sidhe Summer court on a midsummer's night. Born the following spring, Thomas was raised to the age of 3 by his mother until his Sidhe father learned of his birth. He was stolen away to be raised among his father's people, celebrated for a moment and then promptly turned over to the hands of a retainer of his lordly father, Beryl the Fair, a changeling.

When Thomas turned seven, his Gift began to manifest. The Fae would stare at him with odd intensity for long uncomfortable minutes. Other faeries touched and stroked his blond hair before vanishing with a giggle. Then the sudden attention of his Sidhe father returned. On his eighth birthday, Thomas found himself departing from his home among the Sidhe in the company of a curious new person: Mildred ex Merinita, an occasional visitor to the Sidhe court.

Upon returning to Castruum Antiquum, Mildred began training the young Fae-blooded boy in the Hermetic arts. Thomas's apprenticeship had begun.

Thomas's early apprenticeship at Castrum Antiquum under the skilled instruction of Mildred challenged him intellectually and thankfully seemed to exhaust his adolescent energy, mostly. Thomas was only vaguely aware of the mounting tensions that began in the seventh year of his apprenticeship: the Schism War had begun.

Within a few years, Thomas had caught the eye of Balder ex Bonisagus (also of Castruum Antiquum). Thomas's driving curiosity about the arts and about Faerie seemed to be quite suitable for a Bonisagus apprentice, but by the time Balder had noticed the young apprentice, Mildred had already initiated the young man into the outer mysteries. Balder offered Mildred a compromise: a fostering.

Perhaps sympathetic to Diedne colleagues or perhaps fearing being caught in the backdraft of wizard wars, Mildred increasingly pulled away from mainstream Order affairs, often away on excursions in Faerie to train her apprentice, avoiding the struggles of the rival Houses. By 1010 and the pronouncement of the Tremere Wizard War on House Diedne, Mildred had withdrawn with her apprentice fully.

Now a year past his gauntlet, Thomas is cautious, with little experience of the human world and its troubles. He has remained with Mildred, unclear of what his next move should be, though determined to leave the stifling conditions that have become the remains of Castruum Antiqueem.

Thomas's formative experiences in the Sidhe court heavily influenced his fascination with illusion and the power to turn what seems permanent into what is ephemeral and fluid. Thomas's curiosity leads his hermetic study and research into exploring how to influence, if not control, perception whether in the moment or in the memory.

While Thomas has not yet aligned with a particular Merinita society or group, he is most closely fascinated with the Wayfarer and the Shadow Master viewpoints on Arcadia. It remains to be seen which direction he young Merinita may take.

991: Take to Summer Court of the Sidhe

1003 - 1010: Increasingly withdrawn with Mildred into Arcadia or other regios.

1012: Continuing to study in hiding with Mildred ex Merinita.

The Marksman's Bow: Rego Herbam 15 (Base 3, +3 Sight)(+5 levels for 24 uses a day) A beautifully carved and crafted bow of ash and yew, which is enchanted so that arrows fired are unerringly directed by the bowman. When activated by command word arrows can travel as far as the bowman can see, and cannot miss, but are also resisted by MR. When activated the arrows inflict +10 damage. Bow shape grants a lab bonus of +5 for "destroying things at a distance".