A note- papal interdiction only affects catholic oriented divine auras, so muslim auras might be maintained in the area (as would any magical or faerie auras- and I think when it comes to establishing an aura from scratch Faeries would be faster than the infernal since they don't require human assistance.. though that might be better as its own thread...

In 1220, the entire country of Portugal has been under papal interdiction for eight years, since 1212 when Alfonso II was excommunicated by Honorious III. Historically, this lasts until 1223 when Alfonso dies.

Are you sure? I checked and so far have only found the excommunication of the king and his ministers, not the interdict over Portugal.
The king came into conflict with the pope, because he withdrew from many of the endowments and concessions his father Sancho I had made to the Church in Portugal. So an interdict over all of Portugal - and lasting years - would have damaged especially those bishoprics and monasteries whose side the pope took in their conflict with the crown.

EDIT: The party of king Afonso II might after 1220 and until 1223 have been under the anathema, a major excommunication casting it out of the Catholic Church. I don't think that his many opponents from Church and nobility in Portugal felt under the interdict because of that.

CATHOLIC ENCYCLOPEDIA: Portugal (newadvent.org)
mentions three interdicts in the general time period, though I couldn't find dates for 2 nd the third is certainly after 1220, so it seems plausible to me.

The olden CATHOLIC ENCYCLOPEDIA from 1917 has:

By 1221 the old differences had appeared again, and in an acute form: Alfonso had seized church property, compelled ecclesiastics to plead before secular justices and to serve in the wars. The learned and holy Archbishop of Braga convoked an assembly of prelates in which he accused the king of his breaches of faith and scandalous life. The latter met this by confiscating the goods of the prelate, who fled to Rome. Honorius dispatched three Spanish bishops to remonstrate with Alfonso, and, as this had no effect, they excommunicated him a year later. The pope then threatened to absolve the king's subjects from their allegiance and hand over the realm to any prince who cared to take it. A further papal Brief, in 1222, insisting on reparation, together with an attack of leprosy induced Alfonso to enter into negotiations of peace, and these were in progress when he died.

The text I boldened also with my books (a good one is José Hermano Saraiva, PORTUGAL A COMPANION HISTORY, 1997 Carcanet Press Ltd. 4th Floor) is the utmost escalation the pope reached.

From the Wikipedia article on Portugal in the Middle Ages:

“His attempts to strengthen the monarchy and fill the treasury at the expense of the Church resulted in his excommunication by Pope Honorius III, and Portugal remained under interdict until Afonso II died on 25 March 1223.[10][11]”

I’ll add that I did not discover this myself. The unusually long interdiction of Portugal is an important plot point in @Timothy_Ferguson’s “Tin Islands” con scenario for Ars Magica.

Your quote is from wiki: Portugal in the Middle Ages.
Mixing up interdict and anathema happens, especially if you get it from a 1911 Encyclopedia Britannica entry and a Portuguese book about the territorial growth of the country. But even the anathema did last only some one or two years, not 11.

Other reforms included the always delicate matters with the pope. In order to get the independence of Portugal recognized by Rome, his grandfather, Afonso I, had to legislate an enormous number of privileges to the Church. These eventually created a state within the state. With Portugal's position as a country firmly established, Afonso II endeavoured to weaken the power of the clergy and to apply a portion of the enormous revenues of the Catholic Church to purposes of national utility. These actions led to a serious diplomatic conflict between the pope and Portugal. After being excommunicated for his audacities by Pope Honorius III, Afonso II promised to make amends to the church, but he died in Coimbra on 25 March 1223[3] before making any serious attempts to do so.

Anyway, the wikipedia or the Catholic Encyclopedia do not decide this. And neither does a post in another thread.

the link I provided indicates the pope imposed an interdict under the reign of Sancho, who preceeded Afonso, and no indication of when it was lifted.

... and no indication of when it was lifted.

The same link you provided states:

Alfonso II (1211-23) took care to obtain the confirmation of his title from the Holy See, and at the Cortes of Coimbra he sanctioned the concessions made by his father to the Church, whose help he hoped to have when he came to annul the large bequests of land which Sancho had made to his children.

So, this takes care of the interdict before his coronation.

So many kings started on good terms with the Holy See, and see where they went ...

Unless, I suppose, the pope simply forgot to lift the interdict... I mean he did essentially install Alfonso as a reaction to Sancho, which means confirming Alfonso may have been more about making sure Sancho was out than really being about supporting Alfonso.

Unless, I suppose, the pope simply forgot to lift the interdict... I

Neither Afonso II nor the cortes or the bishops would have forgotten that, wouldn't they?

Sancho I was father of Afonso II and died before his son's coronation.

I was looking at a later Sancho whom the pope announced replaced by his brother Alfonso...

however it did indicate that Sancho ignored the interdict, so Alfonso could be unaware of it, indeed any of the clergy who had been ignoring it under Sancho might well have forgotten about it, and the Pope is a busy person who cannot be expected to remember everything.

however it did indicate that Sancho ignored the interdict, so Alfonso could be unaware of it, indeed any of the clergy who had been ignoring it under Sancho might well have forgotten about it, and the Pope is a busy person who cannot be expected to remember everything.

Yes - why bother if it is that unimportant ...

Sorry! If the Holy See confirms a king, it does not leave him or his court or his country under an old interdict. Even just an anathema means, that those under it are no longer part of the Catholic Christian community - and certainly cannot be confirmed as king by the pope.

Well if an infernal manipulated scribe relocates and then forgets about the original interdict orders...
I mean you do remember that we are ultimately dealing with a fictional universe hear, not a history lesson, right? What actually happened? I don't know, the catholic church doesn't seem to have a complete inventory of interdicts and when they were lifted from that time period (at least not available to the public), so the possibility that records were lost mid interdict somewhere is something I consider to be a possibility for a plot point.
That goes double if there is an antipope around somewhere, or a change in popes, and especially if both occur.

I don't know, the catholic church doesn't seem to have a complete inventory of interdicts and when they were lifted from that time period (at least not available to the public), so the possibility that records were lost mid interdict somewhere is something I consider to be a possibility for a plot point.

Indeed - the real archives of the Holy See are anything but complete. Moving the archives along with the curia, occasional sacks of the Vatican between two popes or by 16th century Landsknechts all left their traces.

Well if an infernal manipulated scribe relocates and then forgets about the original interdict orders...

This requires far more than one scribe hiding a copy of a letter or bull! It actually means, that all Portuguese bishops, courtiers, nobles and clearly also Afonso II himself know of the interdict: it affects their day-to-day life even when they strove to ignore it. But by an infernal coup the pope and the fine minds of his curia have just forgotten about it. Imagine how the Portuguese look at the ignorant papal legate delivering the papal confirmation of king Afonso II!
This is a decision for your saga - certainly not for canon in Mythic Europe.

A great summary (by @Galdric -in Spanish) of what has been said about the Tribunal of Iberia. We are getting closer to! https://arsrolica.wordpress.com/2021/09/02/hablemos-de-finis-terrae/

I find it so romantic and awesome that we spaniards are having our tribunal first.

Also in desperate hope that Atlas at some point will decide to reverse the usual path of these things and decide to translate it to English.

Still there is something that scares me a little bit: the announcements that the Tribunal is so big, with quite more magi and covenants than other Tribunals' averages. I can't help but fear this might be a sign that you guys writing this got overexcited by it and just couldn't trim stuff down. Not because of me or probably all we spaniards, because we will be overexcited as well, and more stuff is never enough, but maybe that can become an issue if Atlas decided to translate it to english and have to make sure Iberia fits on its place and doesn't shadow the other Tribunals.

Anyway, I'm already bitting my nails and desperately waiting for the day to start throwing money at this.

Hey
In case it helps as always i have done a small summary in english in my blog.

Penultimate video about the Tribunal of Iberia book! We talk about al-Andalus and some of the non Hermetic traditions of the Iberian Peninsula. A couple illustrations by Pablo Moreno are also shown (the first shows the Almoravid caliph Yūsuf ibn Tāšufīn with the Taifa rulers Al-Muʿtamid from Seville, Al-Mutawakkil from Badajoz and ʿAbd Allāh from Granada; and the second one shows the Almohad caliph Abū Yūsuf Yaʿqūb al-Manṣūr burning forbidden books). Iberia will be here in no time! 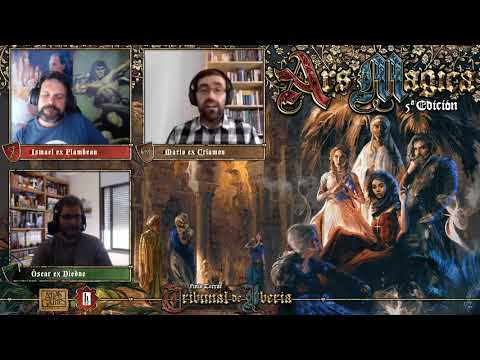 Really looking forward to this! I propose to buy it in Spanish and in English, just in case the English translation is incomplete. My Spanish is very poor, but I'm sure that I can find someone to help.

Thanks to all involved!

I would totally go all in and buy it in English. It might motivate me to even brush up on my Spanish, too!