A description of the covenant

For starters, the covenant today. It is not exactly in the correct spot and orientation, but close enough

The keep of Spontin/Triamore. Seems they completed the last floor. 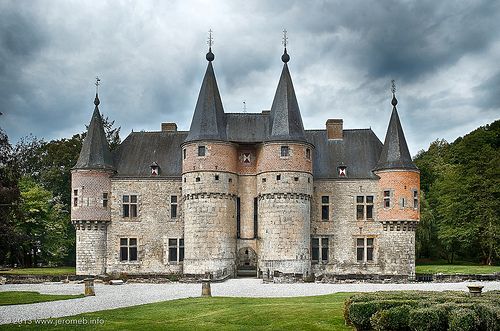 Isn't the Bocq a little too far north? Triamore should be somewhere nearer to Dinant.

This might be a better candidate and it seems to be the right distance to Verdun.

The Château de Fontaine (Dutch: Kasteel van Fontaine) is a chateau in the municipality of Onhaye in the Belgian province of Namur. It is located south of the village of Anthée. The chateau was built near the intersection of the main road from Namur to Luxembourg and the road from Dinant to Liège. The chateau lies to the south of the village of Anthée in a valley surrounded by woods. The chateau replaced a medieval castle, of which there are remains in the north east corner. It was the seat of...

So does Chateu de Fontaine. "The chateau replaced a medieval castle, of which there are remains in the north east corner"

Anyways, maybe we can use the location of Chateau de Fontaine, but use the visuals of Spontin Castle?

Shouldn't we use the location of Triamore outlined in the book? It is close to the Chateau de Fontaine. but its location in the area is a little different.

yes, using the official setting is what I plan to do. Makes the SG's life easier after all

My google-fu failed me and I cannot find any mention of Bois de Haillot or Lucien's Folly, so I defaulted to the closest real-world match

As far as I know those 2 are totally made up locations. I did that same google search a few years ago. The only answers were ArM triamore sagas

We can take the picture of the keep we like and change the location.

The covenant is as described in the ArM4 supplement.

The main change is that the covenant is just a few years old. It was given to a pair of Virgilians in 2017 and they are still around. Now they are doing a roll call for new recruits, as they are finding the running of the covenant taxing and they are facing problems they fear will not be able to overcome on their own.

The player characters are the mystical users that answered their open invitation.

INFRASTRUCTURE
As described, except that the towers are not guttered since there has not been a mystical attack o the covenant. Not very relevant, but just in case.

INHABITANTS
All this can change, but we are taking the setting characters as our working default except for the changes outlined below. The players will also bring companions and grogs no doubt, so some of this information will change for sure as some characters are removed to make space for new arrivals or are taken over by players and designed anew.

The most relevant changes will be as follows.

Anaxagoras and Ulisterius (NPC) are around, and members of the Virgilians. They are the ones that created the covenant a decade ago. Daria LaGris is apprenticing to Anaxagoras, while Lars is apprenticing to Ulisterius. Daria is a serious 14-year-old with a marked sense of duty, way above her age. Lars is a 13-year-old gentle gifted young man. He is easy going and seems to be very smart and liked by the servants of the covenant. There are currently no other magi. A maga named Forba stayed for a pair of ears in the basement and did some weird things with the cellars, but nothing untoward for an Architect.

The magi and their apprentices are out for periods of game time, as they need to attend the court of the Emperor.

The turb is downgraded to just 5 mercenaries (crossbowmen) and 1 Custos per magus, plus Froese and Johan the gentleman that acts as the knight and captain of the castle.

INHABITANTS OF TRIAMORE
NPCs (unless someone wants to play them) that live at Lucien’s Folly and the covenfolk that depend on them.

Anaxagoras. Augustan. Gentle Gift. Powerful in Animo. Stern and serious, but with a reputation of being fair and having a keen mind.

Johan, Captain (specialist). A knight and nobleman [CAN BE A COMPANION EASILY]

The book also mentions Brother Chretien, a visiting monk scholar, and Nasir a Moorish from the court of Granada. None of them are given much role in the covenant, so we can use or remove them as we see fit.

All of these are up for grabs if any player wants them, or they can be removed at our convenience to make space for our own characters.

There are also the 3 following main characters in the village: Hugh the bailiff, Gilbert le long the Reeve, and Pere Hugo, the priest. The village also has a miller, alewife, jurist, hayward and other persons of note but minor status.

As far as I could tell the real-world area equivalent of Lucien's Folly places it between Anhée and Dinant.

Still working out the details of Onfroi but he will likely be a knight.

Since the number of guards are being downgraded from ~20 to 5, why retain them as mercenaries? It would make more sense for them to be vassals at that number.

I found an old discussion of the location of Triamore on this forum. Perhaps this helps here too.

Oh yeah. I also ignored the map on p.105 as it made absolutely zero sense.

I am not sure, why Triamore could have vassals. AFAIK they don't even have a liege, but between 1217 and 1220 just some royal protection. This may really lead them to tread very softly.

Based on their manorial charter they're an imperial, not royal, holding.

Also, the Lord of Bois de Haillot, enjoys a status equivalent to a non-hereditary landed noble while the members of the covenant are considered knights under the service of said lord. That's why Triamore had the number of grogs it did in the original write-up and why it was not remarkable since the lord of the manor can have knights and the knights can have vassals.

Based on their manorial charter they're an imperial, not royal, holding.

Correct! But between 1217 and 1220 there is no Emperor! Just Frederick II as a new king of Germany. So there also can be no Imperial charter in 1217.

Typical German knights - ministeriales - can't have vassals. Even their own status of vassal and the ability to themselves hold further ministeriales has only been recently confimed to some wealthier knights (greater ministeriales).

But 'mercenaries' in the time and area indeed sounds bad: 'armsmen' is far better for Triamore's remaining fighters.

But 'mercenaries' in the time and area indeed sounds bad: 'armsmen' is far better for Triamore's remaining fighters.

I was going to say men-at-arns, but armsmen will do.